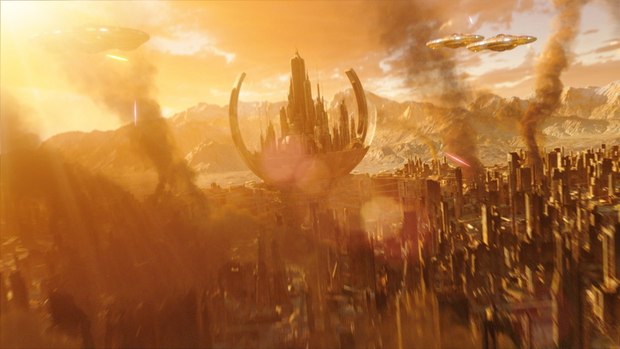 Independent London VFX house MILK announced that it has won a British Academy Television Craft Award for its outstanding visual effects work on the BBC’s Doctor Who 50th Anniversary special: Day of the Doctor, in the Special, Visual & Graphic Effects category. MILK received the award at the 2014 British Academy Television Craft Awards ceremony held last night at The Brewery, East London and hosted by Stephen Mangan.

MILK created a series of jaw-dropping large-scale CG environments, action and CG spacecraft in stereoscopic 3D to support the BBC’s epic 75-minute special Doctor Who 50th anniversary episode. Broadcast on BBC One in the UK on Saturday 23rd November 2013, Day of the Doctor holds a Guinness World Record as the largest simulcast of a TV drama in history.

MILK’s CEO Will Cohen said, “We are beyond delighted to be recognised by the Academy for our work on Doctor Who. For a company set to celebrate its first year in business at the beginning of June this is a fairytale ending to the year!”

MILK won the award alongside special effects companies Real SFX and The Model Unit who created the practical effects for Doctor Who: The Day of the Doctor.

MILK was also a major contributor to the creature effects in Sky/Atlantic Production’s David Attenborough’s Natural History Museum Alive 3D which was also nominated for a BAFTA Craft Award in the Special, Visual & Graphic Effects category.

MILK opened for business just ten months ago and has already completed work on the BBC’s two most recent landmark Doctor Who TV specials: The 50th anniversary special Day of the Doctor and Christmas special Time of the Doctor as well as the third series of Hartswood Films’ Sherlock; Sky’s TV special - David Attenborough’s Natural History Museum Alive 3D (Sky/Atlantic) and feature film 47 Ronin. Milk is currently working on the forthcoming eighth series of Doctor Who featuring Peter Capaldi for the BBC and the new TV drama Jonathan Strange & Mr Norrell, a seven part mini-series (7 x 60’) due to be broadcast on BBC One in the UK in 2015. On the feature film side, Milk is working on MGM’s upcoming Hercules.