BAFTA Award-winning London VFX house creates the visual effects for the BBC’s “Deep Breath,” Peter Capaldi’s debut episode as Doctor Who, directed by Ben Wheatley for the eighth series of ‘Doctor Who.’ 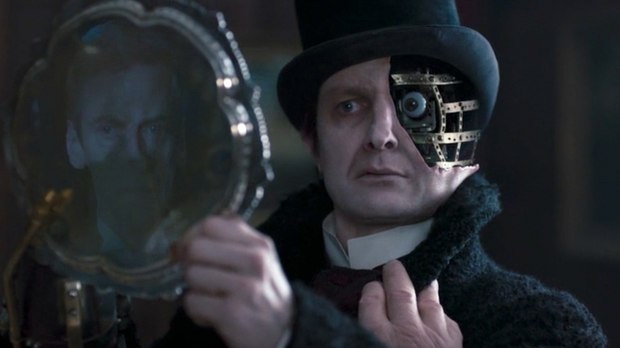 London -- BAFTA Award-winning London VFX house Milk created the visual effects for the BBC’s “Deep Breath,” Peter Capaldi’s debut episode as Doctor Who, directed by Ben Wheatley for the eighth series of Doctor Who. The hotly anticipated 80-minute episode was simulcast and screened in cinemas globally on 23rd August.

The focus of Milk’s work was the sinister and mysterious “Half-Face Man” -- the principal villain - who appears throughout the episode. Milk replaced one entire side of the actor Peter Ferdinando’s head in 87 of the 117 digital shots produced by Milk.

Milk created the CG hollow cage-like structure which makes up the missing half of Half-Face Man’s head as well as the visible internal workings of his head which resemble the mechanics of a clock, with moving cogs, pistons and rotating mechanical parts.

Milk also designed and created the T-Rex in the opening sequence and the Victorian London cityscape which included CG builds of the Houses of Parliament, Big Ben and St Paul’s, along with wide fly-over views of the Thames as the episode reaches its climax.

“The most exciting challenge of ‘Deep Breath’ was realising the ‘Half-Face Man,’ not least because of the sheer number of shots,” said Will Cohen, CEO and Co-Founder of Milk VFX. “We heavily relied upon all aspects of Milk’s pipeline in order to successfully achieve a photo-real look that allowed the audience to totally engage with the character. Ben Wheatley and the production team made it a hugely enjoyable collaboration. He worked very closely with us to enable us to achieve work that we are very proud of.”

Milk is currently in production on the new 12-episode eighth series of Doctor Who featuring Peter Capaldi for the BBC and the new TV drama Jonathan Strange & Mr Norrell, a seven part mini-series due to be broadcast on BBC One in the U.K. in 2015. On the feature film side, Milk has recently completed work on Paramount Pictures and Metro-Goldwyn-Mayer Pictures’ Hercules for director Brett Ratner.

Milk recently won a British Academy Television Craft Award for its work on the BBC’s Doctor Who 50th anniversary special: “The Day of the Doctor.”

During its debut year Milk has completed work on the BBC’s two most recent landmark Doctor Who TV specials: the 50th anniversary special “The Day of the Doctor” and the Christmas special “The Time of the Doctor”; the third series of Hartswood Films’ Sherlock; Sky’s TV special – David Attenborough’s Natural History Museum Alive 3D (Sky/Atlantic), Fox’s 24: Live Another Day and feature film 47 Ronin.