Milk to Create VFX for New Season of 'Doctor Who'

VFX house Milk is commissioned by the BBC to create the visual effects for the forthcoming eighth season of Doctor Who, to be broadcast in 2014; the company was previously behind the visual effects created for the BBC’s Doctor Who 50th Anniversary special episode: Day of the Doctor.

London -- VFX house Milk has been commissioned by the BBC to create the visual effects for the forthcoming eighth series of Doctor Who, starring new Doctor Peter Capaldi. The new series will be broadcast in 2014. Milk was previously behind the visual effects created for the BBC’s Doctor Who 50th Anniversary special episode: Day of the Doctor.

Milk is currently working with the BBC to create the VFX for the much anticipated one-hour Doctor Who Christmas Special: The Time of the Doctor -- in which Matt Smith’s Doctor will regenerate into Peter Capaldi’s incoming Thirteenth Doctor - due to air on BBC One on Christmas Day. Doctor Who series eight will start shooting in January 2014.

The news comes hot on the heels of the BBC’s landmark Doctor Who 50th anniversary special: The Day of The Doctor -- for which Milk created the jaw-dropping VFX work in stereoscopic 3D. Broadcast on BBC One and around the world on Saturday 23rd November the special episode set a Guinness World Record as the largest simulcast of a TV drama in history.

The team at Milk (previously known as The Mill’s TV department prior to Milk’s launch in June 2013) has been creating the visual effects for Doctor Who since its regeneration in 2005. During this time they have scooped a raft of awards including a BAFTA, a VES (Visual Effects Society) Award and an RTS Award for their VFX work. 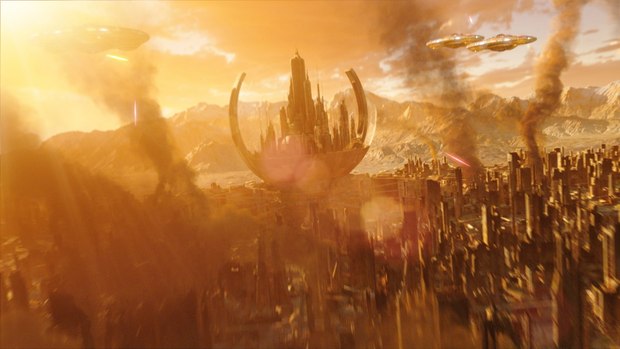 Doctor Who 50th anniversary special: The Day of The Doctor

“Many of us on the team have been privileged to enjoy a 10 year love affair with Doctor Who, so to be able to carry on collaborating with the BBC Wales team on telling these incredible stories fills us with joy and provides us with an opportunity as VFX artists to help push the boundaries of what can be done visually on television,” said Will Cohen, Milk’s CEO.

“A new series with a newly regenerated Doctor is in many ways like starting working on the show all over again. Doctor Who is a show that never, ever gets boring. It’s different every week,” Cohen added. “This will be our 4th Doctor and we are very, very excited!”