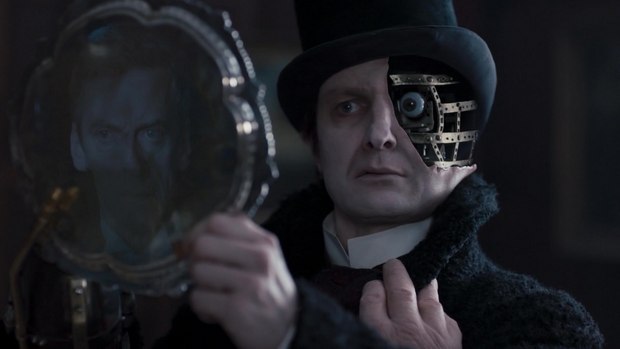 Milk won the award alongside BBC Wales VFX and special effects companies Millennium FX and Real SFX who created the practical effects for the episode.

The focus of Milk’s work on “Deep Breath” was creating the sinister ‘Half-Face Man’ character. Milk replaced one entire side of actor Peter Ferdinando’s head in 87 of the 117 digital shots produced by Milk. Milk created a CG hollow cage-like structure for the missing half of character’s head, as well as the visible internal workings of his head which resemble the mechanics of a clock, with moving cogs, pistons and rotating mechanical parts.

“Deep Breath” was Peter Capaldi’s debut episode as Doctor Who and was directed by Ben Wheatley (High Rise). The 80-minute episode was simulcast and screened in cinemas globally on 23rd August 2014.

Milk’s CEO Will Cohen said, “We are honoured to be recognised by the Academy for our work on Doctor Who for the second year in a row. For a company set to celebrate its second year in business at the beginning of June this is another fairytale ending to the year for Milk!

It is a privilege to work with Stephen Moffat and the BBC Wales team on Doctor Who and provides us with an opportunity as VFX artists to help push the boundaries of what can be done visually on television.”

Milk has just opened a second studio in Cardiff, Wales increasing its capacity to 120 artist seats.