BURBANK, CA -- Iron Mike is taking the fight from the boxing ring to the streets when Warner Bros. Home Entertainment releases Mike Tyson Mysteries: The Complete First Season. In the animated adult comedy series, starring Mike Tyson himself, the former heavyweight champ is solving mysteries left and right with a little help from the Mike Tyson Mystery Team. This crime fighting team includes the ghost of the Marquess of Queensberry; Mike’s adopted Korean daughter, Yung Hee; and a pigeon who was once a man. The gloves come off as the former heavyweight champ and his team gear up for weekly adventures and put unsolved mysteries down for the count!

Mike Tyson Mysteries has become a new fan favorite, holding a spot amongst the top five shows on Cartoon Network’s Adult Swim and is up for a nomination at the 2015 Annie Awards. Averaging 1.5 million viewers over its 10-episode run, the series is renewed for a second season, premiering this fall. Now fans can bring home the mystery-solving team, as Warner Bros. Home Entertainment releases Mike Tyson Mysteries: The Complete First Season on DVD October 20, 2015 for $14.98 SRP. 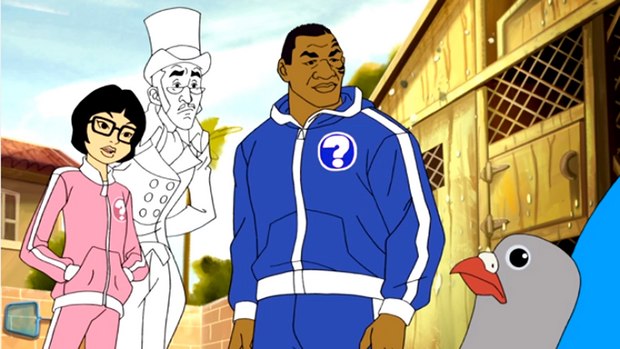 “Mike Tyson Mysteries has taken the genre of animated mysteries to hilarious and outlandish new places,” said Rosemary Markson, WBHE Senior Vice President, Television Marketing. “Number one in its timeslot for Adults 18-34, the show gained fans throughout the season, with viewership for the finale an astounding 46% higher than the premiere! We’re excited to give these fans the chance to enjoy their new favorite show anytime they want with the Complete First Season on DVD.”