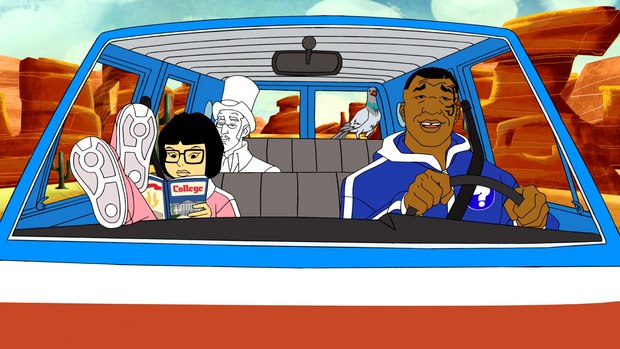 Adult Swim announced that its new animated adult comedy series, Mike Tyson Mysteries, will premiere on Monday, October 27th at 10:30 p.m. ET/PT. The original series from Warner Bros. Animation stars Mike Tyson himself and as the network builds on its big summer ratings, the show is poised to knock out the Monday night competition.

In Mike Tyson Mysteries, Mike Tyson is taking the fight from the boxing ring to the streets…by solving mysteries! Aided by the Mike Tyson Mystery Team -- the Ghost of the Marquess of Queensberry, Mike's adopted Korean daughter Yung Hee, and a pigeon who was once a man -- Mike Tyson will answer any plea sent to him. If you have a problem that needs solving, Iron Mike is in your corner. The gloves come off in this quarter-hour series as the former heavyweight champ and his team gears up for weekly adventures as they put unsolved mysteries down for the count.

Warner Bros. Animation (WBA) is one of the leading producers of animation in the entertainment industry, producing and developing both CG and traditionally animated projects for multiple platforms, both domestically and internationally. For TV, WBA produces series such as Teen Titans Go!, The Tom and Jerry Show and the upcoming Be Cool Scooby-Doo! and Wabbit -- A Looney Tunes Production for Cartoon Network; original animated DC Nation shorts for Cartoon Network; and Beware the Batman and the forthcoming Mike Tyson Mysteries series for Cartoon Network’s Adult Swim.