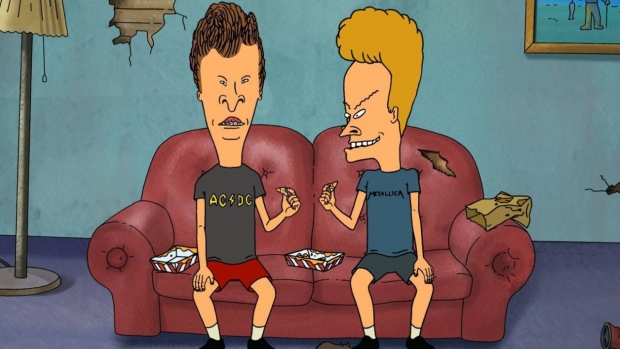 To those either too young or too scarred to remember how gut-bustingly funny it was the first time you watched Beavis shriek, “I am Cornholio! I need T.P. for my bunghole!” on MTV’s raucous, and to many, terribly inappropriate animated series, Beavis and Butt-Head, well… Emmy Award winner Mike Judge’s seminal metal-head slacker duo will soon be back as part of his expansive new deal with Comedy Central.

Judge and his loveable cretins are set to return in what the network is touting as “two seasons of the new series with meta-themes relatable to both new and old fans – Gen X parents and their Gen Z kids.” Wow. As Henry Cavill’s Witcher would say with weary bemusement, “hmmmmmmmm.” “It seemed like the time was right to get stupid again,” said Judge, who will write, produce and provide voice over for both iconic characters. Couldn’t agree more.

Launched in 1993, Beavis and Butt-Head quickly became a force in pop culture and started a television revolution with its pure, unadulterated, satirical commentary on youth and adolescence.  Centered around two teenage couch potatoes, “Beavis” and “Butt-Head,” the unprecedented concept immediately became part of the vernacular in a way no other adult animated series had before.  Known for tackling social issues including teen obesity, workers’ rights and media trends, the show connected with an entire generation, laying claim as one of the most innovative series in the modern-day zeitgeist. With boner jokes… and loving it!

Based on Judge’s 1992 Liquid TV animated short, Frog Baseball, the show ran on MTV for seven seasons beginning in 1993. An animated feature, Beavis and Butt-Head Do America was released in 1996; an eighth season series revival aired in 2011.

The show was notoriously controversial in its depiction of violence, anti-social behavior, sophomoric humor, and general take on issues, like sex - or more specifically, boobs and boners - that many people found offensive. It was also heralded as brilliant satire in its depiction of two utterly useless individuals who behaved in ways so many related to yet would never admit. It appealed to our basest instincts. And it was funny.

And of course, it deserves a special place in the pantheon of animation greatness through its introduction of the aforementioned Cornholio character alone. That character made it acceptable for adults to successfully dodge any accusations of laziness or malfeasance with the wide-eyed growl, “Are you threatening me?”

It’s also worth noting that listening to Judge, as Butt-Head, prank call Buckingham Palace live on the old Mark and Brian radio show was one of the funniest things I’ve ever heard.

“We are thrilled to be working with Mike Judge and the great team at 3 Arts again as we double down on Adult Animation at Comedy Central” says Chris McCarthy, President of Entertainment & Youth Group.  “Beavis and Butt-Head were a defining voice of a generation, and we can’t wait to watch as they navigate the treacherous waters of a world light-years from their own.”

The deal represents a homecoming for Judge after going on to create other landmark series including Silicon Valley and King of the Hill, and movies like Office Space and Idiocracy, among others. Beavis and Butt-Head marks his return to animation as he attempts to show American youth, once again, the beauty, and humor, of utterly mindless underachievement.