Mighty Yeti Studios announces two new interactive storybook apps, Mr. Cupcake Has The Sprinkles and A Shark Knocked On The Door, and the launch of a Kickstarter campaign to help cover the production costs. 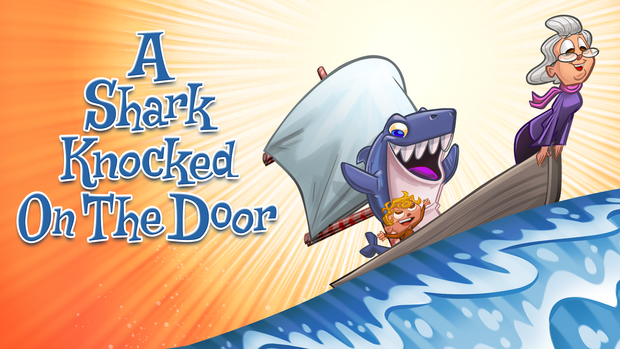 Husband and wife creative team Josh Book and Jennie Book saw a void in children’s digital entertainment and decided to fill the gap with their own original IPs. As co-founders of indie animation startup Mighty Yeti Studios, they have created two new interactive storybook apps: Mr. Cupcake Has The Sprinkles, a quirky and humorous tale of a talking cupcake who is driven to the brink when he can’t identify a crunching noise emanating from his surroundings, and A Shark Knocked On The Door, a heartfelt rhyming story of a boy and his grandma who float boats down the gutter after a rainstorm and form an unexpected friendship with a kindly shark. The Mighty Yeti Kickstarter campaign for the two storybook apps began Tuesday, with 25% of funding reached within the first 48 hours.

“All kids love using iPads and tablets,” says Jennie. “They are instinctively drawn to screens.” The two watched and took notes as their six-year-old son and four-year-old daughter played with interactive storybook apps, which are akin to storybooks from the bookstore but with interactive elements that come to life when you touch the screen, plus sound effects and read-to-me features.

“We noticed several things,” says Josh. “One, we saw there was still space in the marketplace for an independent studio wanting to make quality storybook apps with top- notch illustrations and interactivity.  And two, these storybook apps were helping teach our six-year-old to read.”

Josh, a veteran creative director and animator who has worked on hit TV series such as Bubble Guppies and The Penguins of Madagascar for Nickelodeon, the new Sheriff Callie’s Wild West for Disney, and the recent video game Marvel Heroes, and Jennie, the writer of Mr. Cupcake Has The Sprinkles and A Shark Knocked On The Door, enlisted the help of their professional animator friends Roman Laney and Eddie Betancourt to draw the books. Jennie says, “The opportunity to hire talented friends has been a great way to blend everyone’s creative strengths for this new tablet generation of kids.”

“We love combining reading with entertainment and technology,” says Josh.  “Our apps are drawn by professional animators, the stories are fun, kids love them, and if they’re motivated, the apps will help teach them to read with the word-by-word Read To Me feature.”

Another function and benefit somewhat unique to Mighty Yeti apps is the Spanish-reading option. “We live in California, where about fifty percent of the state speaks Spanish. We know kids pick up second languages like sponges, which studies have shown benefits the brain for future learning,” says Jennie. “Our apps will help both Spanish-learner and English-learner kids -- in the apps they’ll be able to toggle back and forth between languages.”

In taking their storybook apps to Kickstarter, Jennie and Josh will attempt to raise $12,000 in 30 days, which will help cover the cost of programming, sound effects, music, and voice- over actors for narration.  Kickstarter campaigns operate under the “all-or-nothing” funding model, so successful funding will help bring the apps to market sooner and at a higher quality.  The Kickstarter project can be found by searching  www.kickstarter.com for “Mighty Yeti Studios”, and more information can be found via Twitter at @Mighty_Yeti and on Facebook. Crowdfunding will bring the apps to life and help Mighty Yeti deliver fun, educational entertainment to kids around the world.