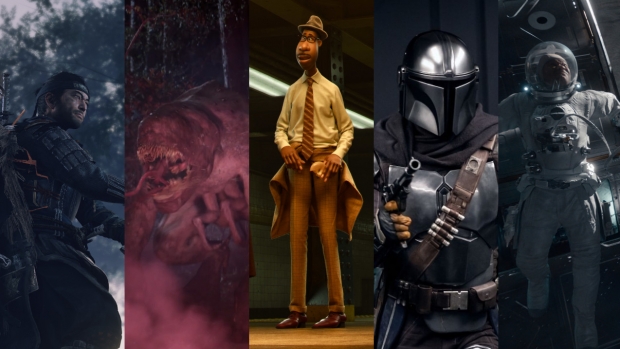 In a virtual show replete with casual clothes and exciting montages, the Visual Effects Society’s 19th Annual VES Awards streamed live this evening, handing out awards in 25 categories as well as special honors to Rob Legato and Sir Peter Jackson.

The preshow and intro were both filled with one spectacular VFX clip after another, something especially well-suited for a virtual show. The ceremony began, as it does each year, with VES executive director Eric Roth addressing the audience. Tonight, via the magic of greenscreens and virtual production, he lounged lazily at a serene forest campsite, sharing his annual list of “Thank Yous” while acknowledging how tough 2020 was as we all suffered through the COVID-19 pandemic. Have to say, done virtually, Roth’s comments and obligatory list reading felt more warm than perfunctory. And then…

… as Roth cheerfully reasoned that a virtual ceremony meant he’d be spared the annual onslaught of barbs from host Patton Oswalt, the cherubic comedian walked into view… as a big green Shrek-like creature, microphone in hand, reminding us all that as far as VES Awards go, physical or virtual, there is no cover for Roth. And the digital diss began. A crack about Roth’s speech being the only thing Zack Snyder could cut and make shorter. Much to our enjoyment.

Soon leaving the forest and bulbous creature avatar for a new virtual set and proper suit, Oswalt launched into his always welcome jabs at the VFX industry; he joked about how boring it must be to watch the VES Awards from home, admonishing the audience that maybe we’d forgotten we can watch porn instead. His joke about Christopher Nolan’s film Tenet being nominated, questioning when the film will actually finish shooting hit the perfect note, as did his follow-up about hoping to see the film in a theatre so afterwards, he’d be surrounded by other people who also had no idea what the fuck just happened. There was a joke that nominee The Crown VFX not needing any white balancing because the Royal family does that on their own… inbreeding… Like each of the ten times he’s hosted the event, his jokes were snappy and short, mostly on point; part of his charm is seeing how much he amuses himself. The pivot to first presenter VES Chair Lisa Cooke happened quickly, and the awards began.

Winners of the 19th Annual VES Awards are as follows:

Outstanding Visual Effects in a Commercial

The One and Only Ivan; Ivan - Valentina Rosselli, Thomas Huizer, Andrea De Martis, and William Bell

Outstanding Animated Character in an Episode or Real-Time Project

Outstanding Animated Character in a Commercial

Outstanding Created Environment in an Episode, Commercial, or Real-Time Project

Outstanding Model in a Photoreal or Animated Project

Outstanding Effects Simulations in an Episode, Commercial, or Real-Time Project

Outstanding Compositing in a Feature

Outstanding Compositing in an Episode

Outstanding Compositing in a Commercial

Outstanding Special (Practical) Effects in a Photoreal or Animated Project

The Visual Effects Society is a professional global honorary society dedicated to advancing the arts, sciences and applications of visual effects and to upholding the highest standards and procedures for the visual effects profession. It is the entertainment industry's only official organization representing the extended global community of visual effects practitioners, including supervisors, artists, producers, technology developers, educators, and studio executives.  VES’ more than 4,000 members in over 40 countries worldwide contribute to all areas of entertainment – film, television, commercials, animation, music videos, games, new media, and special venues.