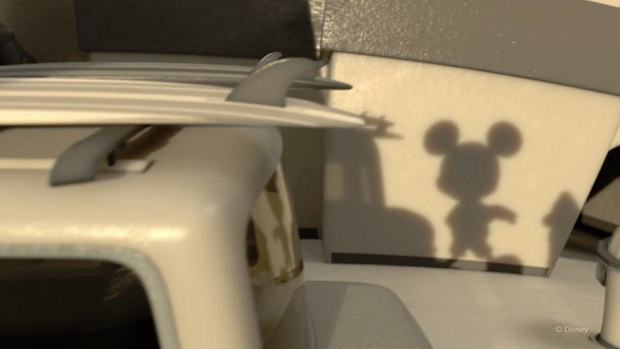 DALLAS, TX -- Imagine creating a spot for a watch that celebrates the 90th Anniversary of Mickey Mouse…but you can’t show Mickey Mouse. Already Been Chewed, a design and motion graphics studio, developed a POV concept that not only solved the problem but tied in the design of the actual watch.

Nixon, a California-based premium watch company that is part of the 90th anniversary celebration and is releasing a series of watches around Mickey Mouse, called on Already Been Chewed to create the 20-second spot.

“The challenge was that the licensing arrangement Disney made with Nixon doesn’t allow Mickey’s image to be in the spot,” ABC’s Barton Damer commented. “Our challenge was to come up with a campaign that promotes the watch and has some sort of call to action that inspires people to want this watch. But, at the same time, what were we going to do for 20 seconds if we couldn’t show Mickey?”

After much consideration, Damer and his team developed a concept that pushed the limits on this restriction, using a complete POV perspective to make viewers feel like they were looking at Mickey Mouse. The team came up with the idea to show Mickey’s hands and feet without actually showing Mickey. In another instance, a silhouette of Mickey is seen in the shadows on a wall that would allow the viewer to understand that the spot is an official Disney and Mickey Mouse release and not just something that was inspired by Mickey Mouse. All told, the spot took three weeks to complete – Damer and his team used Cinema 4D and After Effects to produce the animation.

Targeting the appropriate consumer demographic segment was another key issue. “Mickey Mouse has been one of the most iconic brands in the history of branding, so we wanted to make sure that it also appealed to the Nixon target audience and not just a Disney consumer,” Damer noted. “There were a variety of ways we could go. When you think of Disney, you could brand Mickey for children or you could brand it for adults who still love Mickey Mouse. So, we needed to find a style and vibe that would speak to the Nixon target audience.”

With 16 to 30-year-olds the desired demographic and, since Disney is a West Coast brand, surfing and skateboarding became dominant themes. According to Damer, “We wanted to make sure we were creating Mickey in a kind of 3D tangible way, with more of a feature film, 3D feel to it, because we felt that it should have a little bit more of a modern approach. But at the same time, we wanted to mesh it with a touch of the old-school vibe like 1950s cartoons.”

In that spirit, the team planned the action to start from Mickey walking from his car and culminating at the famous Venice Beach basketball courts and skate park. “The challenge, of course, is how does he do all this and do it in 15 seconds so that we can show the logos at the front and back and a hero image of the watch,” Damer said. “And, that’s where it was fun thinking it through and coming up with the flow of the spot and seamless transitions with no camera cuts or anything like that. It was a lot to pull off in such a short time, but I think we really succeeded.”