New Couch Gag sequence for the opening credits of the season finale from the award-winning director of ‘Chick’ offers a stripped-down aesthetic focused solely on lines. 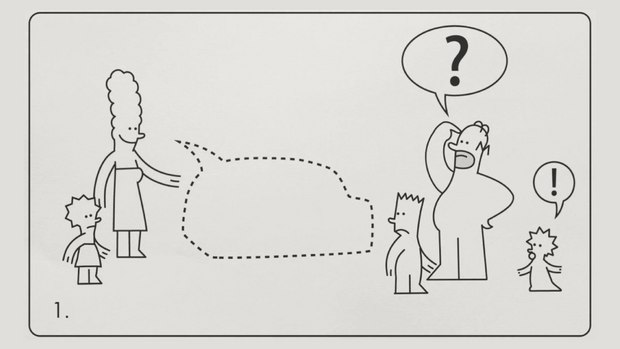 One of the best things about The Simpsons these days is the lengths the showrunners will go to in order to keep its audience engaged and entertained. Last week’s episode, featuring three minutes of live animation, was no exception, and now Polish independent animation director Michal Socha has surfaced for his second guest animator gig for the season finale of the primetime TV stalwart.

The Simpsons has an extensive history of guest animators including, most recently, animation veteran Eric Goldberg, who unveiled a Disney-fied version of the Simpsons family earlier in April. Other guest animators include Ren and Stimpy creator John Kricfalusi, World of Tomorrow director Don Hertzfeldt, Triplets of Belleville director Sylvain Chomet, Bill Plympton, and Guillermo Del Toro.

The director of the award-winning short film Chick, Socha completed his first Couch Gag for the long-running show back in 2014. It was filled with the hyperkinetic graphic sensibility Socha brings to his other work, but this new gag sequence offers a stripped-down aesthetic focused solely on lines.

Courtesy of production company ACME Filmworks, you can check out the new sequence ahead of this Sunday’s season finale, “Orange is the New Yellow,” in the player below: