Method Studios Moves Mountains for the Avalanche on ‘Downhill’ 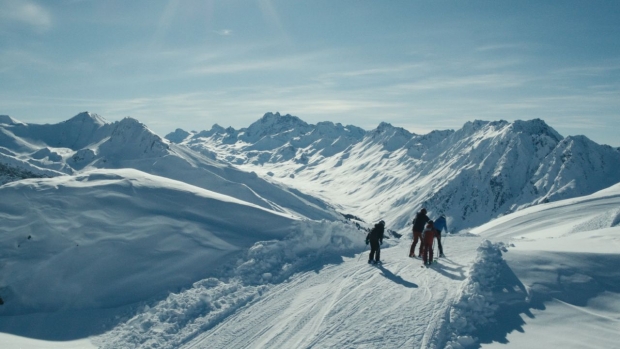 Method Studios has just shared with AWN and VFXWorld some details and images showcasing their VFX work on Searchlight Pictures’ dark comedy Downhill. In the film, directed by Nat Faxon and Jim Rash, a married couple reevaluates their relationship after barely escaping an avalanche during a family ski vacation in the Alps. Though originally shot on location, the pivotal avalanche sequence was very much a work of Method digital wizardry.

To prepare for the show, Method VFX supervisor Josh Simmonds and his team studied footage of various types of avalanches, both naturally occurring and those set by explosives, such as the one seen in the movie. While on set at an Austrian ski resort, Simmonds captured extensive reference photography of the surrounding location and mountain topography, which his team used to construct 3D mountain models. “Avalanche snow has a distinct way of refracting light and is also bright white, both of which pose lighting challenges,” Simmonds explained. “Also, the sequence was shot over a few days at various times throughout the day, so it took some experimentation to find the appropriate lighting angle to make sure everything flowed seamlessly. The avalanche is a major plot point and we were committed to getting it just right.”

Simmons noted that the restaurant shooting location, while picturesque, presented logistical challenges, requiring gear and crew to be transported, via chair lift or snow cat, to and from halfway up the mountain to where filming took place. To best serve the story at the request of the directors, Simmonds and his artists digitally altered the mountainscape shown during the sequence, drawing from the surrounding topography to update the mountain pictured in the avalanche. “Being on location and collaborating with the directors early on was incredible,” he shared. “The fact that everyone had spent time together surrounded by the imposing alpine landscape provided a collective vision for how the snow and topography should appear. The mountain range we ended up creating was actually several kilometers away from the resort – you could say we moved mountains for this project! It was a whole heap of fun.”

To perfect the avalanche movement, Method artists went through a substantial period of R&D, ultimately finding their desired results through a mix of rigid body dynamics and fluid simulations. These base simulations were the driving influence for subsequent volumetric and particle detailing, which artists then fine-tuned for timing and art direction. In addition to the avalanche, Method also created set extensions and digital environments for the film.