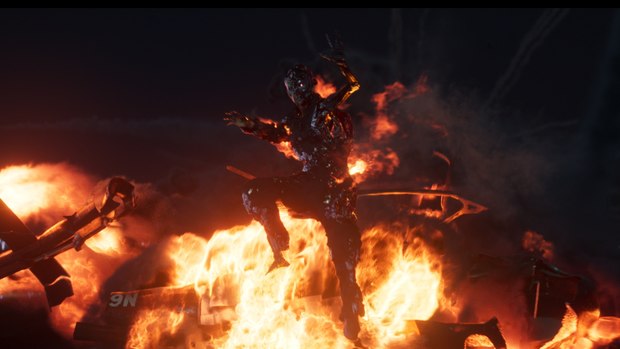 Method Studios has just shared with AWN some of their recent work on Terminator: Dark Fate, Tim Miller’s sci-fi action-adventure, the latest entry in the continuing Terminator futuristic man vs. machine saga.  Terminator: Dark Fate reunites a battle-hardened Sarah Connor (Linda Hamilton) and a T-800 Terminator (Arnold Schwarzenegger) in an unlikely alliance as they try to protect Dani Ramos (Natalia Reyes), together with mechanically enhanced super soldier Grace (Mackenzie Davis), from a deadly new Rev-9 Terminator (Gabriel Luna). The film is packed with numerous explosive visual effects, including an intense five-minute sequence involving a stolen C-5 military aircraft and a crashing helicopter, all created by Method Studios under the direction of Method VFX Supervisor Glenn Melenhorst.

In the film, with the Rev-9 in hot pursuit, Sarah, the T-800, Dani and Grace break into a military base to steal a C-5. The group is followed in flight by the Rev-9 in a helicopter; a fierce battle ensues.

Scenes inside the C-5 cargo bay were filmed on a predominantly bluescreen set. Method artists then digitally created the C-5 interior based on provided assets, swapping out the actors for digital doubles as needed. The helicopter was fully CG; for maximum authenticity as the helicopter explodes, the team created a highly detailed version of the asset, modeling everything from the engine block to the interior door upholstery.

“Our asset team worked hard to find the sweet spot in putting the right amount of detail into the helicopter,” Melenhorst shared. “We wanted enough elements breaking apart to really sell the explosion as the helicopter smashes to pieces but keep the asset light enough that we could run it through a simulation. If it was too detailed, the helicopter wouldn’t simulate, but if there was not enough detail, it wouldn’t crumple properly.” Creating the animation of a believable helicopter crash was a considerable challenge, as artists worked to achieve realistic crash movements that were also art directable. As the vehicle crashes, the way it deforms and crumples informs how and where it rolls. On top of getting the simulation just right, artists added fire licking up the side of the aircraft. According to Melenhorst, “It took many hours of simulation and terabytes of data to get where we wanted to be in terms of photorealism and crash mechanics. We had a massive hill to climb but the collaboration with production was great and hopefully our work is completely transparent to the audience.”

Method also created a wide establishing shot of the military base and several shots at the border crossing after helidrones slam into police vehicles, resulting in large fiery explosions.