Primary vendor on the Marvel Studios hit created environments, digital doubles and most of the climactic battle. 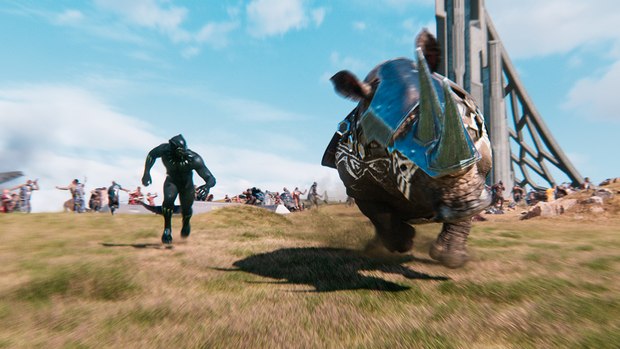 Marvel Studios’ highly anticipated Black Panther stars Chadwick Boseman as the hero and king who must fight to protect his nation of Wakanda from Michael B. Jordan’s villainous Erik Killmonger. Marvel enlisted longtime collaborator Method Studios as a primary VFX vendor to create the massive digital environment for the mythical African nation of Wakanda, suits and digital doubles for Black Panther and Killmonger, and the bulk of the film’s third act battle.

Method’s team of 400 artists, led by VFX Supervisor Andy Brown and Associate VFX Supervisor Todd Perry, worked closely with Director Ryan Coogler and Production VFX Supervisor Geoff Baumann to bring Wakanda and many of its inhabitants to the big screen. Method artists referenced multiple landscapes across Africa to build Wakanda -- a 3,600 square km CG environment which is seen in fly-through shots plus scenes set on the top of the mystical nation’s highest point, Mount Bashenga.

“Looking out from the top of Mount Bashenga, you can see the rich diversity of African landscapes -- it looks lush and jungle-like in one direction, and more like the plains and savannah in the other, so we had multiple ecosystems to tackle, but it really drives home the vastness of these shots,” said Brown. “The environments were extremely detailed and often required a high level of interactivity; for example, in fight scenes we would have CG grass and other elements interacting with both live action and digital double characters.” Method was also tapped to bring Black Panther’s and Killmonger’s suits to life digitally. Using concepts from Marvel’s look-dev team as a jumping off point for the design, Method’s suits needed to be photoreal and hold up to a lot of scrutiny in both action sequences and downtime in Shuri’s lab. In addition to the look of each suit, which incorporate Wakandan glyphs and other unique design elements, the suits have active properties that needed to feel believable.

“The suits are made of dynamic nanotechnology that binds together around the wearer. To convey that visually we developed triangles as the micro-structure of each suit,” said Perry. “The nanotechnology scans its wearer and these triangles respond through a procedural simulation to form the suit around the given structure, starting with one wave and growing out from there. Each suit also captures kinetic energy which can be released later as a fighting tool. We conveyed that through a bubble effect with unique colors representing the coursing energy for each character.”

Additionally, Method was responsible for the bulk of the film’s climactic third act battle between multiple warring factions, ultimately leading to a one-on-one showdown between Black Panther and Killmonger. Method built the Talon Fighter and Dragonflyer aircrafts seen in the sequence, and created 40 digital doubles plus crowd simulations for the large fight. Given that each faction, such as the Dora Milaje female warriors and the Jabari fighters, have unique fighting styles, Method directed motion capture sessions based on input from the stunt coordinators to gather a foundation for each style.

“In addition to randomizing the height, weight and other characteristics of each fighter to add variance to the crowd, we had to incorporate more specific elements such as unique face tattoos for each Dora Milaje fighter and the signature hairstyles of the Jabari warriors,” said Brown. “Each was built in high resolution so that any of the keyframed more foreground characters could be swapped out. We also completed digital double work for Black Panther and Killmonger, which of course needed to be fully photoreal. Thanks to Chadwick’s and Michael’s great performances, we had a strong foundation for our work.” Method also contributed design work and effects shots showing the inside of Wakanda’s vibranium mine, the look of Shuri’s lab as well as animating gadgets within, and created CG rhinos, vehicles and weapons.