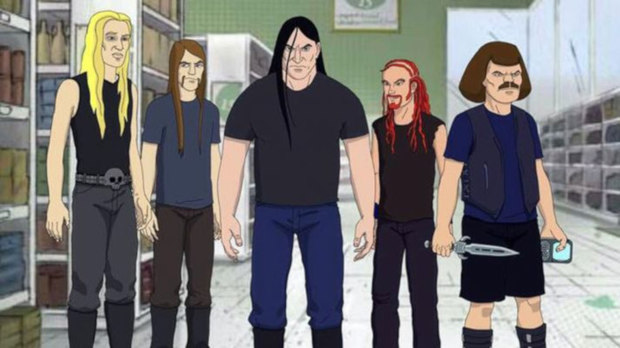 Jon Schnepp, best known as the director of Adult Swim’s animated series, Metalocalypse, died this past Friday at age 51 from complications following a massive stroke. In a career spanning more than 20 years, Schnepp worked as an animator, editor, writer, director, producer, voice actor and designer on such shows as Space Ghost Coast to Coast, Aqua Teen Hunger Force and The Venture Bros. However, he was most closely associated with the heavy metal homage-parody, Metalocalypse, which chronicled the adventures of the ridiculously successful fictional death metal band “Dethklok.”

His fiancé, Holly Payne, announced his death with a statement on Twitter:

It is with a broken heart that I announce the passing of our beloved Jon Schnepp, who died peacefully on July 19, 2018.

Jon ultimately succumbed to the effects of a massive stroke. He had a blood clot removed from his left carotid artery, but the bleeding could not be stopped. Irreparable and catastrophic damage was caused to both hemispheres and all brain activity ceased. His sister Deborah and I had to make the difficult decision to take him off of life support. There was no possible way for him to recover. Please understand.

I spent the last hour of his life with him holding him, laying my head across his massive chest, kissing him, stroking his hair, playing his favorite songs, and telling him over and over again how much I love him. My life has been forever changed by Jon. I feel endlessly grateful to have shared 16 years of laughter, love and incredible adventures together, including the making of a feature film, as well as a television series that I hope to complete and release later this year in his honor.

Jon’s mother Miriam, his father David, his sister Deborah and I are devastated beyond measure. We appreciate your love and support, and most importantly your understanding of our privacy at this time as we grieve.

Schnepp was a tour de force on Metalocalypse, which ran on Adult Swim from 2006-2012; working with co-creators/writers Brendon Small and Tommy Blacha, he not only designed the look of the five band members, but produced all 62 episodes of the show, directing 34 as well as editing 50. The show was animated at Titmouse, who also produced The Venture Bros., Superjail! and Black Dynamite for Adult Swim – Schnepp recently worked as an animator at Titmouse on the animated feature, Nerdland (2016).

Schnepp also wrote and directed The Death of ‘Superman Lives’: What Happened?, a live-action 2015 documentary about Tim Burton’s proposed 1998 Superman Lives feature film that would have starred Nicolas Cage. At the time of his passing, Schnepp was serving as host of entertainment website Collider’s Collider Heroes as well as appearing as a frequent panelist on Collider Movie Talk.

A Go Fund Me Page has been setup to help defray the immense cost of his hospitalization.