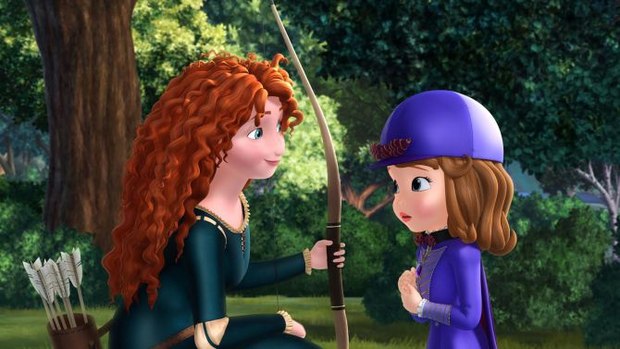 Sofia's Aunt Tilly returns to give her a gift that will unlock a secret world and appoint Sofia storykeeper of magical books in Sofia the First: The Secret Library, the first episode of a four-part story arc, debuting Monday, October 12 on Disney Channel (9:00 a.m., ET/PT) and Disney Junior (7:00 p.m., ET/PT).

On Tuesday, September 1 Disney Publishing Worldwide releases the illustrated storybook and e-book Sofia the First: The Secret Library, which introduces the tale of how Sofia becomes storykeeper of magical books without endings and now, must pursue adventures that will finish the narratives. An accompanying app featuring three exclusive stories and play experiences will be released on Thursday, October 8.

A full-length preview and game for Sofia the First: The Secret Library will debut on WATCHDisneyJunior.com and the WATCH Disney Junior app beginning Monday, October 5.

Disney Junior's Sofia the First is the all-time record holder for the top two cable TV telecasts for Kids 2-5 and TV's #1 series in Girls 2-5. It tells the story of Princess Sofia, an ordinary girl who becomes a princess and, throughout her journey, learns that possessing the characteristics of a true princess -- honesty, loyalty, compassion and grace -- is what makes one truly royal. The series stars the voices of Ariel Winter as Sofia; Sara Ramirez as Queen Miranda; Wayne Brady as Clover; and Tim Gunn as Baileywick.

Sofia the First was developed by Craig Gerber and is directed by Jamie Mitchell. Gerber and Mitchell both serve as executive producers. Emmy Award winners John Kavanaugh and Kevin Kliesch are the series' songwriter/music director and composer, respectively. Sofia the First is a production of Disney Television Animation.