‘Big Bang Theory’ actress voices the Light Thief, a kooky kangaroo bandit who steals all the lights and leaves the entire town of Axel City in the dark. 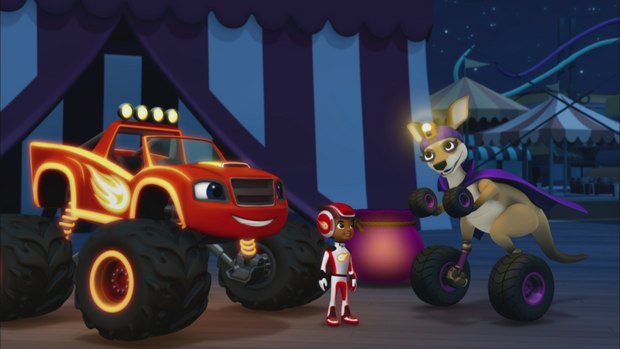 The Big Bang Theory television star Melissa Rauch brings her comedic vocal talent to a special episode of Nickelodeon’s hit animated series Blaze and the Monster Machines, the number-one preschool show on all TV in 2016.

In the episode, “Light Riders,” premiering Friday, January 6, Rauch voices the Light Thief, a kooky kangaroo bandit who steals all the lights and leaves the entire town of Axel City in the dark. Outfitted with super bright speed lights, monster truck Blaze follows the Light Thief on a wild chase down dark city streets to restore light to the city.

The Blaze and the Monster Machines app, Nickelodeon’s overall top-ranked preschool app of 2016, will add a new Light Riders location, available via in-app purchase in early February. Users can join Blaze, Crusher and Pickle as they race on 15 new tracks in the nighttime location, overcoming obstacles along the way. The location introduces the new STEM concept of reflection by showcasing the use of glowing tracks and racer headlights that illuminate elements in the dark.

Preschoolers can continue the adventures of light-up Blaze with Nickelodeon’s Blaze and the Monster Machines Light and Launch Hyper Loop Playset and the Light Riders die cast assortment from Fisher-Price, which feature translucent vehicles that light up when rolled. The products are available now nationwide.

Currently in its third season, Blaze and the Monster Machines follows the adventures of the amazing monster truck Blaze and his eight-year-old driver AJ. The series is the first preschool show on TV to comprehensively cover all areas of STEM (Science, Technology, Engineering, Math) in every episode.