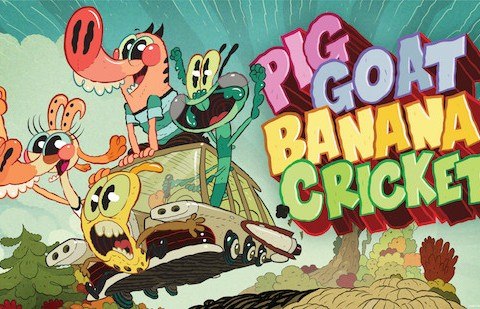 On paper, Pig Goat Banana Cricket seems too strange for TV, but isn’t that always the case with the best kids shows? The newest member of Nickelodeon’s ‘toon family has hit the airwaves -- and it’s bold, adventurous and totally awesome. Born from the brains of renowned indie comic book artists Dave Cooper and Johnny Ryan, the show doesn’t hold back on any of their singular giddy weirdness. Harnessing more than a little of the anarchic, gross-out glee of its progenitor Ren & Stimpy, each episode unfurls in a Pulp Fiction-esque cut-up narrative structure, tightly interweaving the titular characters’ surreal storylines until their absurdist exploits chaotically collide. The results, both in aesthetic and storytelling, are not quite like anything seen before in a cartoon for wee ones.

Join Animation Breakdown this Sunday as Ryan and award-winning executive producer David Sacks (The Simpsons, 3rd Rock from the Sun) go behind the scenes of this deliciously bizarre kiddie confection, followed by a live table read by series voice actors Candi Milo (Foster’s Home for Imaginary Friends) as Goat, Paul Rugg (Freakazoid!) as Cricket, and Thomas F. Wilson (Biff from Back to the Future) as Banana, AND an exclusive sneak peek of a brand-new episode!

The kid-friendly show will be followed by a signing with the cast and creators. The screening and panel is part of a week-long slate of mind-expanding international animation, old and new, shorts and features, at Animation Breakdown 2015.