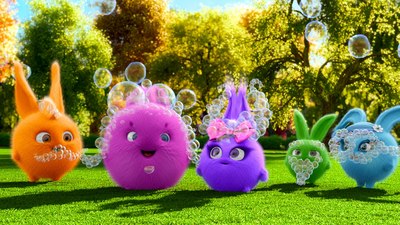 LONDON -- Media I.M., a specialist in premium animation and family entertainment, has announced a representation deal with Belarus’s Digital Light Studio for Sunny Bunnies. The London-based content distribution company has also appointed Julia Oginska to head up its sales push into Central and Eastern Europe (CEE).

Sunny Bunnies, a non-dialogue CGI animation comedy aimed at 4-7 year-olds, launched on the Disney Channel in Russia and CIS in December. Under the deal, Media I.M. has the exclusive worldwide rights to the series outside of Russia, CIS and China, including both TV sales, and digital and VOD rights.

The Sunny Bunnies are five beaming balls that can appear anywhere there is a source of light, from sunshine to moonlight. In each episode, the cheeky creatures bring their fun and games to a different location, a circus, a carousel, a park, embarking on mischievous adventures and spreading laughter and happiness. The end of every episode concludes with a fun collection of bloopers.

Media I.M.’s recruitment of Oginska reflects the company’s growing presence in the CEE. Oginska set up sales agency FILMAR last year to specialize in content selection, acquisition and sales across the region. In her new role, she will oversee all Media I.M.’s sales into Poland and other key CEE territories. With seven years of experience in the Polish media industry, Oginska’s CV includes managing CEEMEA sales at Discovery, TVP S.A. (national broadcaster) and heading programming and acquisition at DTT documentary channel Fokus TV.

Maria Ufland, co-founder of Media I.M. commented, “As our company expands, so too has our role as a gateway for quality content flowing in and out of CEE, Russia and CIS. Belarus is developing into one of the most exciting territories in the region, and we are proud to be among the first wave of independent distributors to represent Belarussian content, especially content of the calibre of Sunny Bunnies, which has been endorsed by the likes of Disney. Meanwhile, having Julia on board to manage our sales back into those territories closes the loop as we seek to diversify into L&M and digital.”