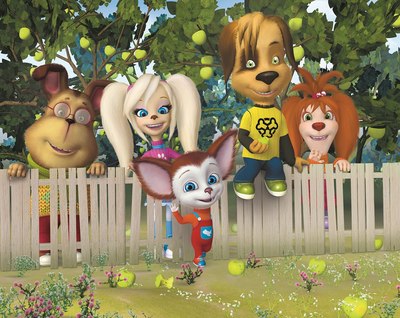 In Media I.M.’s latest deal, Nickelodeon Russia has taken Robodz (15 x 11 mins), Studio Atria’s animated comedy about the everyday life of a gang of robots living on Mars, for broadcast in Russia, across the CIS and Baltic territories. The four-year deal, initiated during MIPCOM in October, covers 14 countries with the series planned to be on air in February 2015.

“We look forward to welcoming Robodz on Nickelodeon and look forward to offering this new exciting show to our young viewers,” Elena Balmont, General Manager, Russia, CIS, Ukraine and Baltics, said. “This acquisition reinforces our strategy of offering both top international and also strong local content to our audience and supporting innovative producers in the region.’

The Pooches — Melnitsa Animation Studio’s CGI animation about a family of lively and loveable dogs that has become one of Russia’s most popular evening children’s show will see Russia’s favourite dog family launch on M2 Hungary in 2015. The Hungarian public broadcaster has also acquired Pin-Code, Petersburg Animation Studio’s animated sci-fi series about a penguin inventor called Pin, which is a spin-off of the Kikoriki series and features all main characters first introduced in Kikoriki.

“This is a brilliant start for Media I.M. in CEE,” said Media I.M. co-founder Irina Nazarenko in making the announcement. “These three deals confirm what we believed when we launched Media I.M. last year -- that there is a growing appetite across Central and Eastern Europe for premium content as broadcasters and platforms reach for quality to distinguish themselves in a very competitive market.”

“It’s extremely gratifying to see our shows launching on the leading free to air public broadcaster in Hungary as well as on prestigious pay TV platforms such as Nickelodeon Russia and Ultra TV,” added Media I.M. co-founder Maria Ufland. “Nickelodeon is a global power player in children’s entertainment so these deals are also a tribute to our portfolio of compelling, quirky content that ticks all the boxes for broadcasters looking for fail-safe children’s programming.”