Ringling students’ ‘In a Heartbeat’ takes gold in the animation category. 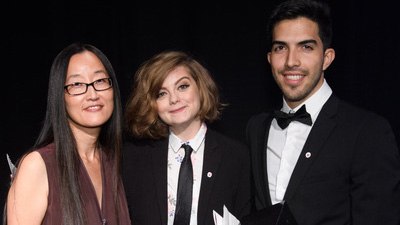 Jennifer Yuh Nelson presents the gold medal in the animated film category to Beth David and Esteban Bravo for ‘In a Heartbeat’ at the 44th annual Student Academy Awards.

LOS ANGELES -- The Academy of Motion Picture Arts and Sciences honored 17 student winners from colleges and universities around the world at the 44th Student Academy Awards ceremony, held Oct. 12 at the Samuel Goldwyn Theater in Beverly Hills.

The 2017 Student Academy Award winners are: