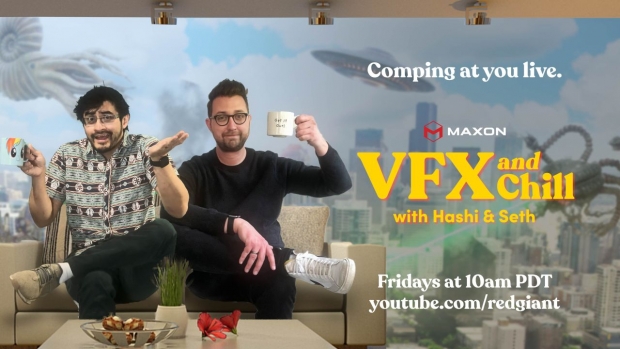 Maxon has announced the launch of its all-new live web series, VFX and Chill starring Seth Worley and Daniel “Hashi” Hashimoto, aka Action Movie Dad. The hosts will peel back the curtain on a part of the VFX creation process that is mostly omitted from tutorials. The 90-minute show debuts May 28, 2021 and will stream live every Friday at 10am PDT on YouTube.

Each episode will explore the beginning stages of creating an effect, the part where artists throw ideas and iterations at the wall to see what sticks. It is in that trial-and-error phase that the creator often discovers new workflows and tricks. The series aims to inspire, educate, and introduce a few new techniques and tools that even veteran designers have missed.

“VFX and Chill is more of an entertainment talk show format than an instructional tutorial,” commented Worley. “Sort of like if ‘VFX Artists React’ and a conversational podcast collided and there were no survivors.”

Dates, times, and registration for all Maxon’s webinars and events is the Maxon Events page.