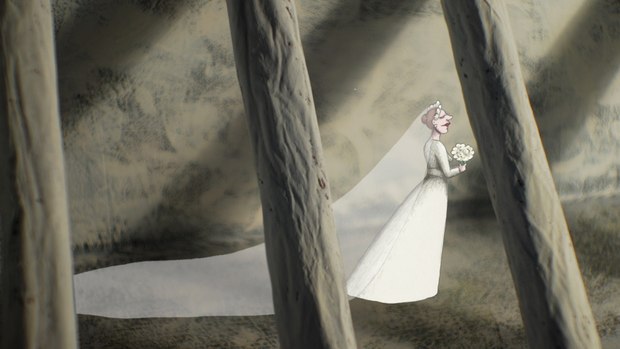 NEW YORK -- Fresh off his Screen Actors Guild Awards win at this past Sunday’s SAG Awards, actor Matthew Modine has joined the cast of Signe Baumane’s next animated feature film, My Love Affair With Marriage. Modine’s Best Ensemble SAG Award comes to him for his interpretation of Dr. Martin Brenner in the mega-hit Netflix original series, Stranger Things. His upcoming projects include the Sicario sequel Soldado, thriller 47 Meters Down, Comedy Central’s Idiot Sitter, and the very British comedy of manners, The Hippopotamus.

Modine is no stranger to indie animation, having lent his voice to the Academy Award-nominated A Cat in Paris, Mia and the Migoo, and Wrinkles. He’s also collaborated with Oscar-nominated animator Bill Plympton on several projects including Santa, The Fascist Years and The Flying House.

“I recently saw Signe Baumane’s first animated feature, Rocks In My Pockets, and was very impressed with her animation style and storytelling,” said Modine. “I wanted to be an animator when I was growing up -- I silently still do -- and I love supporting independent animators. I’m thrilled to be working with Signe on her second film.”

My Love Affair With Marriage infuses music and neuroscience into a personal story of love, gender, and marriage. The film follows Zelma, a fiery young woman with a wild imagination as she journeys through many marriages (some real, some imaginary) while confronting societal pressures and her own biology. The film is a very personal love story; an animated feature film for adults. Modine will voice “Bo,” Zelma’s second husband who has a shocking secret that eventually destroys their marriage. Matthew will also Executive Produce the film with his producing partner Adam Rackoff for their company, Cinco Dedos Peliculas.

“I’m so excited to be working with Matthew Modine,” Baumane said. “In animation, voice comes before visuals and movement. An actor has a tremendous impact on how the character will be animated, so the right casting is very important. Matthew is uniquely suited to create this complicated character. Using only his voice, he can convey Bo’s masculinity mixed with extreme vulnerability. It is exactly what we had in mind for Bo. We are super excited that he has joined the project!”

With three weeks to go, Baumane’s Kickstarter campaign has already raised nearly $20,000 from more than 200 backers. Supporters of the project can receive a variety of exclusive rewards including original animation drawings from the film. The campaign ends on February 24.

My Love Affair With Marriage is written and directed by Signe Baumane, produced by Sturgis Warner, and Executive Produced by Matthew Modine and Adam Rackoff for Cinco Dedos Peliculas.