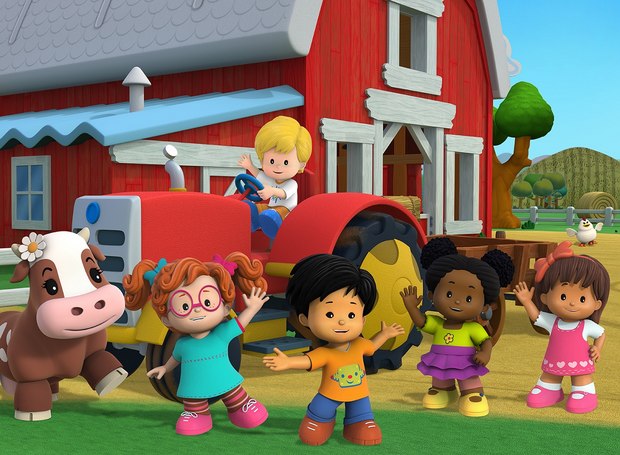 Based on the original Fisher Price brand and created for children ages 2-5, Little People is an animated, musical/comedy series that celebrates the power of collaborative play. The series invites preschoolers to join our five, loveable “little people” as they embark on imaginative adventures, inspired by their playful antics in a typical, suburban backyard. Whether learning to juggle in the jungle or skywrite in outer space, ‘little people’ know that building on one another’s ideas is the best way to have fun.

“We are thrilled that Sprout’s viewers and parents will be joining Little People on their big adventures!” said Christopher Keenan, VP Global Content & Executive Producer, HIT Entertainment. “Sprout is the ideal preschool broadcast platform for this musical, comedy series about imagining a better world.”

“Sprout is delighted to team up with Mattel and HIT Entertainment on the all new Little People series,” said Lisa O’Brien, VP of Programming at Sprout. “We’re excited to share the Little People friends’ world of wonder and sense of discovery with our viewers.”

Each 11-minute episode of Little People includes a lesson in personal or social development and a variety of musical, comedy and make-believe moments -- all loosely woven together in a sketch show format. With guidance from Ron Slaby (Centre on Media and Child Health, Children’s Hospital Boston/Harvard Medical School), Little People is designed to model rich imagination and pro-social collaboration skills that serve as a foundation for healthy development.

The news follows the December 2015 announcement of a partnership between Mattel and DHX Media, a global leader in kids and family entertainment content, which will see the two co-produce new episodic, short-form and long-form programming of Little People. The partnership will also see DHX handle all future global distribution for Little People.

The Little People series 1 has already been sold to several other broadcasters around the world including Cartoonito (UK), RTL (Netherlands), Discovery Kids (LATAM), E-TV (South Africa), TV Cultura (Brazil) and Televisa (Mexico). In addition to broadcast, the Little People series will be available on Sprout’s TV Anywhere beginning March 7th and across Sprout’s VOD and digital platforms beginning March 20th.