Mattel Creations takes off in advance of MIPTV with greenlight of ‘WellieWishers’ animated series from American Girl and new broadcast deals for Barbie ‘Dreamtopia’ TV movie. 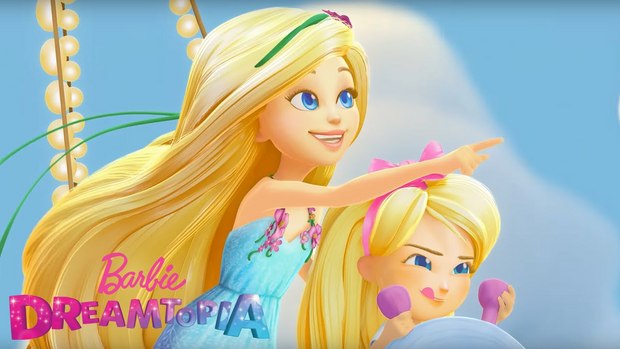 “Today, toys and content are increasingly inseparable,” said Balsam-Schwaber. “More than ever, children expect play experiences that seamlessly combine toys, content and stories in an imaginative and engaging way. By leveraging the power of our global consumer brands, our goal with Mattel Creations is to build and amplify these integrated play experiences on a global scale, in ways that will resonate with children and parents alike.” Mattel Creations comes to market with an extensive library of brands and properties to accelerate and maximize Mattel’s content development and distribution activities. As Chief Content Officer, Balsam-Schwaber will oversee all strategies for the new division, including development slates, programming and distribution opportunities, as well as entertainment and talent relationships.

Keenan, a producer and executive with over 25 years of experience on multiple Emmy award-winning productions, has played a vital role in building several of Mattel/HIT Entertainment’s most iconic brands, including Thomas & Friends and Bob the Builder. He will oversee a new centralized content development and production team, to include Playground Productions in El Segundo, the HIT content creation team in London, and the American Girl content creation team in Middleton. He will be based out of Mattel’s El Segundo offices, reporting to Balsam-Schwaber.

“This is an incredibly exciting time to expand my role at Mattel, and to bring the talents and expertise of multiple content teams together under a single, creative banner,” said Keenan. “Mattel and its brands are known for their enduring, iconic characters and our goal is to grow deeper engagement with consumers through compelling content on a variety of platforms. With incredible in-house creative resources and best-in-class partners, the Mattel Creations team is truly poised to be a leader in entertainment content for children and families.”

Mattel Creations has greenlit WellieWishers (26 x 11), a brand new 2D-animated series for girls ages 5-7 from premium brand American Girl, and will unveil the new series for the very first time to buyers and distributers at MIPTV.

WellieWishers features a character-based story narrative centered on five best friends -- Willa, Kendall, Ashlyn, Emerson and Camille -- who imagine, play, sing and dream in their whimsical garden. When the WellieWishers step into their colorful rain boots, they’re ready for anything, stomping in muddy puddles, dancing with fireflies, and most importantly, navigating the ins and outs of friendship through play and imagination. Written by head writer Noelle Wright, and executive produced by Christopher Keenan, the series will be produced and distributed by Mattel Creations content distribution team and animated at Submarine Studios in Amsterdam. The series has entered production and will be delivered to broadcasters by end of year.

When a child plays with Barbie they imagine everything they can become, and this summer, Barbie encourages children to dream with the launch of the movie special, Dreamtopia. The all-new, magical and make-believe world of Dreamtopia is imagined by Chelsea, the youngest sister of Barbie. Barbie is known for her vivid imagination, which is something that runs in the family. The new special sees Chelsea following in her elder sister’s footsteps as she shares an assortment of fantasy worlds and heroic roles with viewers. Children from around the world are invited to experience the adventures of Barbie, Chelsea and her puppy Honey, as they swim through rainbow rivers with beautiful mermaids and fly through cotton candy clouds with fairies where their imaginations allows them to be anything they want. Produced by Julia Pistor (Jimmy Neutron, Lemony Snicket’s A Series of Unfortunate Events) and animated by Snowball Studios, Dreamtopia is a new Barbie special targeting a younger pre-school demographic than previous films. Additionally, the special has digital shorts (8 x 3) for broadcaster promotion and YouTube activation and will have a new line of dolls and pets reflective of the content and adventure games on Barbie.com.

In acknowledgement of its track record as an innovative content creator and forward thinker, Mattel has been named MIPTV 2016’s Brand of the Year; and Richard Dickson, Mattel’s President and Chief Operating Officer, will accept the award and deliver a keynote speech on Tuesday, April 5 at 17:15 as part of the market’s Media Mastermind Keynote series. Balsam-Schwaber will also be present at MIPTV this year, speaking at the “Brands & Online Video Lunch Summit” on Tuesday, April 5 as well as engaging in an on-stage interview with Fullscreen’s Head of Sales Kevin McGurn at Fullscreen’s Digital Fronts Session on Wednesday, April 6.