Watch the trailer for the new season, dubbed ‘Part 3,’ that chronicles Bean’s continued growth into her power and destiny. 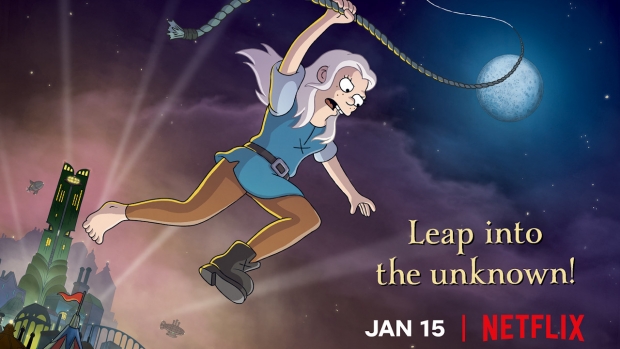 The tagline says, “Destiny calls. Disaster awaits. Disenchantment Part 3 is coming January 15.” Seems apt to us! A new season of The Simpsons creator Matt Groening’s adult animated comedy debuts on Netflix next month. In case you’ve forgotten, the fantasy series follows the medieval misadventures of hard-drinking young Princess Bean, her feisty elf companion Elfo, and her personal demon Luci. Along the way, the oddball trio encounter ogres, mermaids, walruses, and lots of human fools all while uncovering the deeper mystery of Dreamland.

Back in 2018, the series received a pickup for 20 more episodes, with 10 to air in both 2020 and 2021. Produced by The ULULU Company for Netflix, with Groening and Josh Weinstein (The Simpsons, Futurama) serving as executive producers, the animation is provided by Rough Draft Studios.

In Disenchantment Part 3, Bean continues to grow into her power and own her destiny. As the fearless friends venture out to discover new worlds, they might just find there really is no place like home.