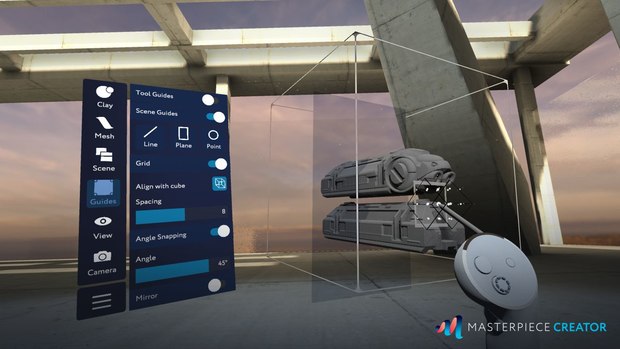 “Masterpiece Studio is a first of its kind VR creative suite that is a cost-effective solution to rapidly go from idea to usable 3D assets,” commented MasterpieceVR CEO, Jon Gagne. “The suite’s feature set lets creators make professional 3D assets extremely fast and can be adopted into an existing workflow in just hours.”

"Masterpiece Studio is an exceptional creative tool for our Viveport users who want to be immersed in their creativity,” added Viveport VP, Bjorn Book-Larson. ”This VR software is a real game-changer for 3D content creation - letting anyone learn, create, and animate in 3D."

The software immerses users within their creation in scalable 3D with the modeling tool complementing and enhancing existing professional workflows. It is intuitive, fast and easier to learn than traditional 3D modeling software, allowing users to quickly rig, skin, pose and apply pre-made animations to their model.

According to Darkslope associate producer, Nathaniel Smith, "Motion dramatically improved the time we spent rigging characters that were both humanoid and non-humanoid. Painting skin weights in VR has to be one of the most naturally intuitive ways I've ever rigged a character. In a hyper-competitive industry where turnaround time is everything, I can't see us letting go of Masterpiece Studio anytime soon." Masterpiece Studio has all the creation tool features of the original MasterpieceVR and Motion apps, with the addition of:

The software is compatible with most 3D programs, including but not limited to 3DS Max, Maya, ZBrush, Substance Painter, Marmoset, Blender, Medium, Tvori, and Flipside.

Free and professional subscription versions of Masterpiece Studio can be downloaded at MasterpieceVR, on Viveport, Steam, or Oculus. Additional information is available here.