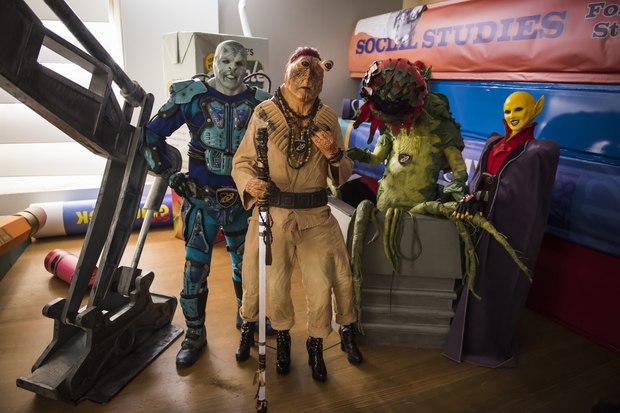 VANCOUVER -- Acclaimed creature FX studio MASTERSFX has just earned a 2019 Daytime Emmy Award nomination for Outstanding Makeup for its work on the Netflix movie Aliens Ate My Homework. Todd Masters, founder and president of MASTERSFX, also served as a co-producer of the project, alongside producers Roger Lay, Jr. and Eric Carnagey of Lay-Carnagey Entertainment.

Fellow nominees in the Outstanding Makeup (Craft – Non-Drama) category include game show The Price Is Right (CBS), talks shows The View (ABC) and The Talk (CBS), and Disney Channel prank series Walk the Prank. The 2019 Daytime Emmy Award winners will be announced on May 5.

For the project, MastersFX designed and created the film’s title aliens. Starting with a series of concept illustrations, Masters and his team developed the original images from Bruce Coville’s book. “We all loved Katherine Coville’s art -- from the books -- and we wanted to expand on those ideas, in their cinematic-form,” said Masters. “Since I was one of the producers, and working with a tight budget, we were able to cut a million corners -- quickly getting designs approved, our FX builds were started early on, and our alien cast members were hired fast. We even managed to sneak one of our longtime studio supervisors, Brad Proctor, inside a plant, to portray the role of Phil the Plant! His part was later voiced by William Shatner,” he added.

Other members of the film’s Galactic Patrol cast were the graceful and powerful Madam Pong, portrayed by Tristan Risk (American Mary, Rabid, The Editor); Alex Zahara (Stargate, iZombie, The Man In the High Castle) as Tar Gibbons, and Dan Payne (Watchmen, The Flash, Star Trek: Beyond) as Grakker, a blue-faced alien soldier who has a behavior module for nearly every personality.

“We got very lucky with our aliens cast -- everyone was perfect and amazing,” Masters continued. “We were lucky to be able to invite them in early, as we had done several projects with each of them and knew they’d be perfect for these characters. Working with the rest of our MastersFX team, developing these characters was an amazing and fun process. We had to pinch ourselves -- everyone that we wanted for this project was just as excited as we were.”

In addition to the puppets, prosthetics, and animatronics work MastersFX traditionally contributes to the films and TV projects for which it is involved, the team also designed and created the alien costumes, weapons, and a variety of props for Aliens Ate My Homework. “Each of these characters evolved in our makeup and dressing rooms, after a few costume fittings. Each performer would come by and we’d literally start building on them, embellishing their costumes with a variety of additional items. As each member of the ‘Galactic Patrol’ is from a different part of the universe, our team made sure each actor had his or her own look, style, color and feel,” said Masters.

“Normally, so many of these character FX would have been nearly impossible given our tight budget. But since we were so personally invested in the project -- and all such big fans of Bruce Coville’s books -- we insisted that everyone on the team gave it the old ‘Get’r done’ attitude, and just have fun. For all of us, it was truly the love for the project that got this made – and the Emmy nomination is the topping on the cake!” Masters concluded.

“From the very start of this project, we set our sights on making sure that every aspect of Aliens Ate My Homework would make young viewers believe in the wonder of the story so they would want to be a part of this adventure,” said Lay and Carnagey. “Todd Masters and his team at MastersFX helped us achieve that by surrounding the cast with wildly imaginative practical creatures that could perform and interact with our cast without any limitations. As longtime fans of Todd’s work, we can say that working with him on this film was a dream come true.”