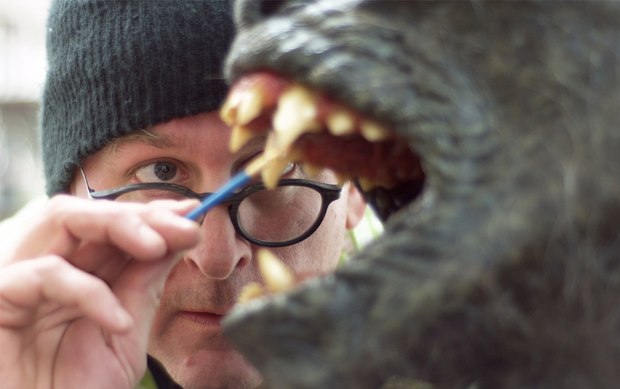 HOLLYWOOD -- Looking back at a career that’s lived-through 30 years of industry change -- from globalization and digitization of staid production efficiencies, to computer graphic visual effects, to “there’s an APP for that” -- award winning Todd Masters, founder and president of acclaimed creature FX studio MASTERSFX, says he is amazed at how his practical FX continue to still be in demand -- even more prevalent -- in today’s crowded field of digital visual effects. “The hand-crafted art of make-up effects, prosthetics and highly realistic artificial bodies, remains at the core of our business for 30 years now!” Masters enthused, celebrating his company’s milestone. “Our physical, on-set practical FX work is very-much in demand these days. I’d even say, we’ve been busier these last couple of years, more than I can ever recall. That surprises even me.”

He states that a current crop of in-the-know filmmakers has helped the resurgence -- demanding a more believable and organic look for their film’s FX. “Many of today’s renowned directors were kids when I started this business. And like me, they grew up watching monster movies and dreaming of creation. Because of this childhood wonder, and their passion for realizing these creations -- we find that many are prefer having these things show up on set -- integrating the onset practical FX, with digital work. Directors like Adam Wingard, Christopher Nolan, Guillermo del Toro, JJ Abrams, James Gunn are poster boys for the love of practical FX.”

Masters’ company’s experience mixing practical work into modern visual effects -- along with many other methodological changes in his company, seems to be the key to their vibrancy. “Practical FX work onset not only can help with budgets, but it often grounds the film into some reality,” Masters added. “If everything has a magical appearance to it, it’s difficult for audiences to grasp story and parse objectively.” Masters points to the recent Star Wars and Star Trek films and how they relish the successful mixing of both practical and digital FX. “JJ Abrams comes from making his own hand-crafted films. And like many other modern auteurs, he gets it. He and I were sitting on a plane a few years ago, talking about just how practical FX owes a resurgence -- and ways to align with digital, for a better result, as we were doing on Fringe, for him, at the time. I was showing him shots on my laptop, from Falling Skies and other projects, where we had integrated practical and digital aliens beautifully. And he loved it.”

Today, screens both large and small are filled with MASTERSFX’s practical art. Their latest projects include: “Not only are we coming off one of our hottest seasons in our studio’s 30 year history, but some our colleagues and competitors from other FX shops are also reporting a similar spike in their businesses, too. Practical FX are consistently being featured on both television and the big screen, from hit series like The Walking Dead and American Horror Story, to the recent hits Deadpool, HBO’s Westworld, Monster Calls, Interstellar and Prometheus,” said Masters, further explaining why practical FX work remains so prevalent in 2017.

“If you told me, say, 20 years ago, when CG really started taking hold within film and TV production, that we’d be so busy today, I would have been greatly surprised,” he added. “But we’ve learned to stop worrying -- and just embrace the continued and ever growing demand for our art!”