Since new studio launched in 2016, facility has done makeup FX for a number of popular TV series including ‘Handmaid’s Tale,’ ‘Umbrella Academy,’ ‘The Boys’ and ‘Coroner;’ next up is SYFY series ‘Day of the Dead’ slated for release in Fall 2021. 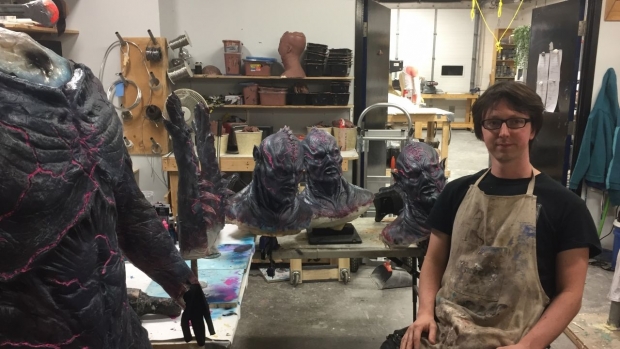 Five years ago, MastersFX (MFX) opened an additional studio just outside Toronto in Etobicoke. Since launching on April 1, 2016, the MFX/Toronto studio has been worked on a number of top projects, such as The Handmaid’s Tale; Coroner; The Umbrella Academy; The Expanse; and, most recently, the hit Seth Rogen/Evan Goldberg Netflix series, The Boys.

Founded in Los Angeles in 1987 by Todd Masters, MFX is known for creating the Emmy Award-winning cadavers for HBO’s Six Feet Under; the vampires for True Blood; the Borg from Star Trek; the babies from Look Who’s Talking; the werewolves from the Underworld series; Chucky from Child’s Play; and the large Predator alien from the 2018 release The Predator, to name a few. “More than five years ago, we were already busy with several projects in Toronto - Hemlock Grove, Falling Skies, and Heroes Reborn, without the benefit of having a local studio based there,” explained Masters. “We’d make our creatures in one of our other shops, and then ship it to Toronto, praying that it would get there in one piece. We were also already working with local makeup FX legend Zane Knisely way-back then, and he played a crucial role with our expansion into Ontario. Eventually, one pilot we shot in Toronto was picked up - and the showrunner urged us to ‘get local…or go home’ - so we did! Zane, of course, came fully on board - even before we had any real estate in the area – as our team leader and supervisor in Toronto, ever since.”

“We started immediately on Season One of The Expanse, doing various makeup FX for the show - and even after a few episodes, I’m not so sure the producers believed we actually had a local studio site,” added Knisely. “I remember one producer even coming by early one morning, checking the address, to see if we were actually really there!”

“Toronto is a happening place, and the film crews are world-class.,” continued Masters. “Every project we’ve done in the Toronto studio has been a joy. Our team at the Etobicoke studio is the finest - our work there has been consistently impressive. What I love about having the multiple studios is that every artist brings a fresh perspective, inspiration, and his/her uniquely individual experience. And each of our shops likes to show-off to one another - like it’s a creative competition between the locations.” One of MFX/Toronto’s artists, Steven Kostanski, has pushed his talents further, having launched a successful second career as a director. His recent feature film Psycho Goreman is a genre hit, returning nearly all its modest budget in the first weekend of release.

Kostanski began working with MFX when it landed in Winnipeg, his hometown. The FX house was working on the film A Haunting in Connecticut and needed some local help. They found Kostanski. In addition to his on-going makeup FX work for MFX, Kostanski had created several hit cult film favorites, including Return of Leprechaun, The Void and “Man-Borg.

“Steve used his horror-making know-how to maximize every ounce of the practical monsters and gore FX that fill the picture,” explained Masters. “The movie features several monsters, creatures, robots and dynamic armored alien beings, all of which sprang forth from Steve’s and our Toronto team’s creative minds. Even competing with the big-budgeted, studio monster and genre films out there, Pschyo Goreman is being hailed as one of the best monster movies in recent years!”

“We were bursting out our bay door with creatures during the making of this film,” noted Knisely.  “It was a creatively exhausting movie, but somehow we pulled it off! The monsters are fun and a key part of the movie. Psycho Goreman tapped into a broad demographic, with a mindset ranging from a childlike to an adult experience. It transported me back to monster movies I loved when I was a kid. That’s how I felt when I watched it. The film is almost nostalgic, and I feel is one of the best ‘kid’ movies ever made.”

Next up for the MastersFX team is the new SYFY miniseries Day of the Dead, slated to debut during Fall 2021. Both Kostanski and Masters serve as executive producers with the former directing several episodes.

“Clearly, we’ve created a monster here in Toronto, both in front of and behind the cameras,” concluded Masters. “It seems the creature, character, and makeup FX industry is sturdier than ever. These five years of MastersFX in Toronto has exceeded my wildest dreams – and I have incredibly wild dreams, too!”