Animation studios are already utilising this technology to empower animators and improve efficiency. Once a simple Massive agent version of a character has been made, normally time-consuming processes such as adapting a walk cycle to uneven terrain or keep-alive animation for characters can now be achieved in minutes instead of hours. Animators are able to direct their characters using agent variables, lanes, flow fields etc. So for example, a character could be directed to walk across the scene and at a certain point look towards another character, all achieved in minutes. Now with 7.0 the results can easily be tweaked with the new blend character tool. So in the example, the character may transition into fully keyframed animation at the end of the shot, or its arm motion could be overlayed from the animation rig.

The improved IK solver in 7.0 means that animators need never worry about knee popping when using Massive to direct a character. While knee popping can fairly easily be avoided when animating by keyframe, it is notoriously difficult to avoid when using autonomous agents. 7.0 makes this problem a thing of the past.

Massive 7.0 brings big improvements for Massive crowd artists in rendering, animation and the user interface. We're excited to announce Arnold support. At the same time our rendering pipeline has become even more efficient. The IK solver has been improved and now knee popping can be completely eradicated. Massive is even more compatible with Maya by supporting x, y, z joint scale and every type of Maya curve interpolation. Last year we saw the completely new user interface, and we've been building on that in 7.0 with some great new user interface features making Massive even easier to use. These are just some of the new features in Massive 7.0. 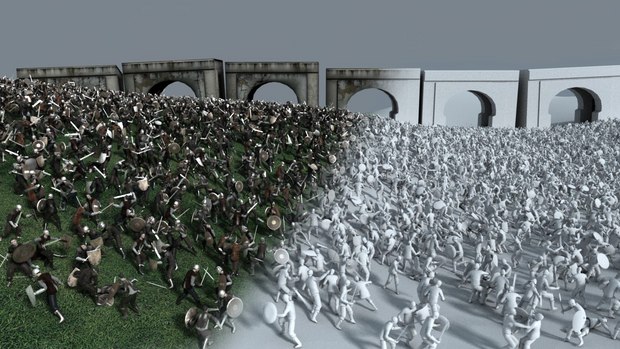 Massive now works seamlessly with Arnold, the groundbreaking renderer used on Hercules, Edge of Tomorrow, Gravity, Robocop, and many more feature films. Using the Massive render pipeline it's now possible to leverage Arnold's famed photorealism to effortlessly render scenes of hundreds of thousands of agents that could otherwise require terabytes of storage.

The 7.0 versions of our renderer plugins now provide a huge increase in render performance in multi- threaded renders. On a four core workstation or server this can mean up to 4 times the rendering speed, depending on the renderer. And of course computers with more cores will benefit from even greater renderer speed improvements. This affects rendering with all supported rendererers: Air, 3delight, RenderMan, Mental Ray, V-Ray and Arnold.

Support for all Maya curve types including auto-tangent and all types of pre and post infinity. Joint scaling in x y and z including scale compensation is now fully supported in Massive. So now any kind of animated translation, rotation or scaling in Maya can be faithfully reproduced in Massive by simply importing the animation. This is particularly useful for importing animation for terrain, cameras and lights. And the animation in Massive can be just as easily edited in Massive as it was in Maya.

The problem of popping of knees and elbows when using inverse kinematics, or IK, is as old as IK itself. There are various techniques for remedying popping when animating, but these are not effective for autonomous agents. The new IK damp control in 7.0 allows artists to specify the amount of damping to apply to knees and elbows so that popping never occurs.

The IK solver in Massive usually does a good job of finding suitable, naturalistic joint angles for any particular position of a hand or foot. But it does depend somewhat on the configuration of the agent's skeleton. This dependency has now been removed in 7.0 by allowing the preferred orientation of the limb to be set to any of six  directions,  providing  complete  freedom  in  the  design  of  the  skeleton  and  greater  compatibility  with skeletons from other packages.

Shows EEG-like animated graph of selected brain nodes. This not only looks cool but is very useful.