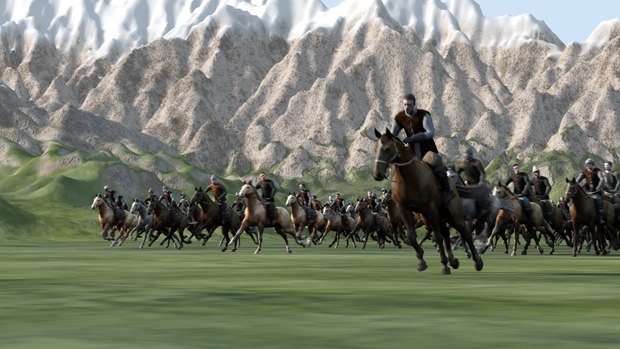 “There have been a lot of films and movies featuring dozens of horses at full gallop, but filming the real animals is difficult and dangerous, and animating them is cost prohibitive for many studios,” said Massive CEO & founder Stephen Regelous. “Using a single Horse Agent, an artist can get the film-quality results at a fraction of the cost and control the action in a way filming real horses could never hope to achieve.”

The Horse & Rider Agent joins Massive’s AI-controlled “Ready to Run Agents“ series, offering artists the ability to create complex crowd simulations using pre-assembled “agents,” which operate using fuzzy logic to automate character responses. Artists working in Massive can choose the type of agent they want to rent or purchase -- human, machine or animal -- then set the agent’s motion and behaviors to determine movement, progression and variation. After establishing and customizing their characteristics to match the desired look of an agent, the artist assigns a route and a starting point to each agent within the simulation. From there, the agents take care of the rest.

All agents, including the new Horse & Rider Agent, are pre-built with a skeleton, motions, brains, geometry, cloth, textures, shaders and controls. Agents can also be customized to create a unique physical appearance. In the case of the Horse & Rider Agent, the pre-built package includes dynamic hair simulation for the manes and tails.

To capture the equine movements, Massive turned to Profile Studios, the group responsible for motion capture work with some of Hollywood’s biggest production teams, including Lucasfilm, Legendary Entertainment and most recently, Marvel Studios. The team at Profile spent two days capturing and mapping the movements of horses at various speeds, both in an indoor arena and outdoors in a large, open space. Dozens of biometric motion capture sensors monitored every muscle and movement on the horse, resulting in the Horse & Rider Agent’s ability to gallop, canter, jump, dressage, walk, trot and more.

“The film-quality realism and actions comprising the Horse & Rider Agent are simply incredible,” said Dave Levy, group CG technology director at The Mill. “I am continually impressed at how easy and fast it is to use what, in reality, is an incredibly smart and sophisticated software application.”

The “Ready to Run“ series currently includes the Locomotion, Stadium, Ambient, Mayhem, Combat Sword and Car Agents. Each agent can be purchased outright or rented for a limited time (for a minimum of 90 days with the option to increase the rental period in 30-day increments). Costs vary, starting from $500 to rent and $3,000 to purchase, depending on the agent.