MarVista Entertainment and Tycoon Enterprises gear up for rollout of the television series and consumer products program across the region for Level-5’s global phenomenon ‘Yo-Kai Watch.’ 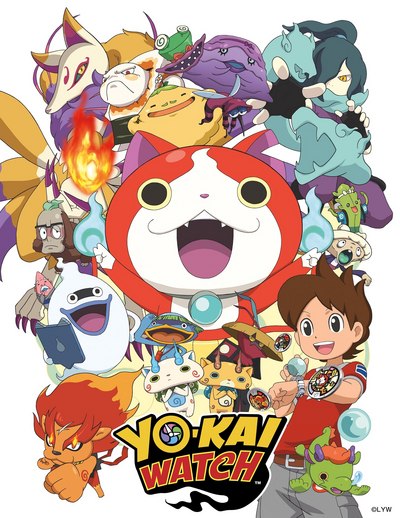 LOS ANGELES, CA -- MarVista Entertainment (MarVista), an independent producer and distributor of features and family entertainment programming, has appointed Latin American licensing and merchandising agency Tycoon Enterprises to represent YO-KAI WATCH, the most recent television and consumer products sensation from Japan, across the region. Last year, MarVista acquired all Latin American rights to the hit property, which includes the television episodes and all licensing and merchandising rights from LEVEL-5 abby Inc.

Tycoon is developing a strategic and comprehensive licensing and merchandising program based on the franchise, building on the brand’s multi-media, cross-platform identity. Categories include toy, apparel, accessories, school supplies, electronics, collectibles, novelty and publishing. The program will begin rolling out this holiday season and continue into early 2017.  The series is already set to launch on Disney XD Latin America on June 13.

“With its groundbreaking success in Japan and significant expansion into Europe and the U.S., YO-KAI WATCH shows no signs of slowing down, and we are excited to collaborate with Tycoon to bring this innovative franchise to Latin America, and introduce kids to the YO-KAI WATCH craze, which we anticipate will be the next retail sensation,” commented Fernando Szew, CEO, MarVista.

“YO-KAI WATCH is such a fun show with an original story that combines all the factors to create success, engaging stories, quirky humor, fantastic creatures and more, and we are delighted to partner with MarVista on this adventure, as the licensing agent across our region,” added Elias Fasja, Tycoon Enterprises President. “With the plethora of creative assets, we have the capability to create an extensive line of engaging products and exciting consumer promotions.”

YO-KAI WATCH has been a true phenomenon, since it was first introduced two years ago in Japan.  It continues to be the top-rated animated show for kids 4-12 years old on TV TOKYO. In Japan alone, the franchise has sold over $2 billion in merchandise in the first 15 months, in addition to robust sales of games, music and publishing. In the US, Nintendo has seen steadily increasing game sales, and the Hasbro boys toy line has been a top-ten seller. Over 50 licensees have signed on for the North American market to date. In North America, initial programs beyond toys and games will be available at multiple retailers beginning with back-to-school programs in 2016, with a much larger multi-category presence for fall and Holiday 2016.