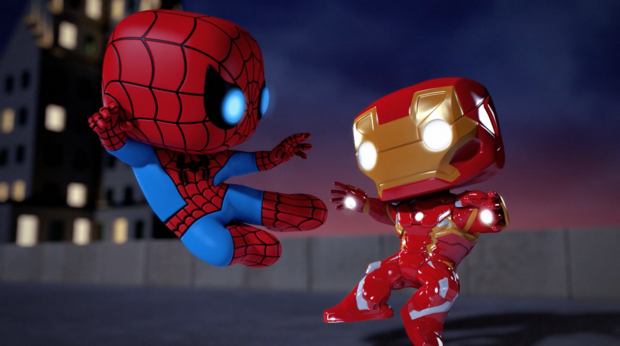 Featuring some of Marvel’s most popular Super Heroes and Villains, including Spider-Man, Iron Man, Loki, Rocket, Groot, the Collector, Deadpool, and Venom, the first animated short Spellbound is available for viewing now via the Marvel YouTube page. Watch Iron Man and Spider-Man face off against the devious Loki and his mind-controlling scepter:

“Telling Marvel stories in the Funko Pop! aesthetic is a special kind of magic unlike anything we’ve ever done,” Cort Lane, Marvel’s Senior Vice President of Animation and Family Entertainment. “These shorts are both hilarious and action-packed – and irresistibly adorable too. Really, I think all audiences will love them.”

“We are beyond excited to bring our Pop! Vinyl to life by collaborating with Marvel,” said Mark Robben, Funko’s director of marketing. “We hope fans enjoy these short films as much as they do collecting Pop!, and hopefully we’ll be able to create many more.”

The Marvel Funko shorts include story and animation by A Large Evil Corporation and were executive produced by Brian Mariotti, Dan Buckley, Cort Lane, Joe Quesada, and Alan Fine.