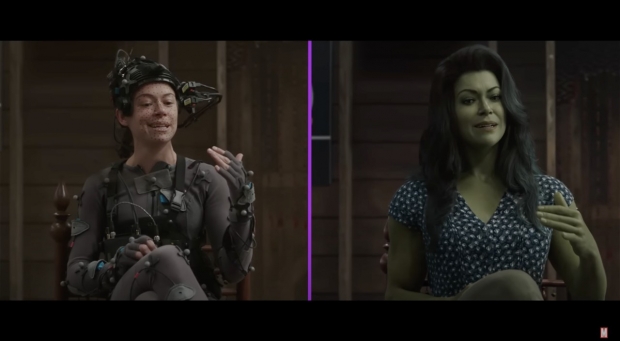 Marvel shared a surprise ‘Behind the Scenes” VFX breakdown this weekend for the Disney+ series She-Hulk: Attorney At Law, giving us the inside scoop on how the team turned Tatiana Maslany into the alluring green giantess. Marvel’s host Lorraine Cink spoke with Visual Effects supervisors Shannon Justison and Dadi Einarsson to get their first-hand accounts on how the stunning VFX was brought to life for the studio’s first CG character-led series.

With the first season now complete, the team was able to draw back the curtain and reveal some of the small screen Disney magic, spoiler free. The pair first elaborated on how unprecedented it was to create a series led by a CG character, with Justison stating, “I think the most interesting thing for doing the VFX for a show like this is that we have a CG lead. The process is extremely complicated, which starts with vis dev and draws from the comic books. Secondly, the other side of that is that we look at our casting. The important part of this is that we need to know what Tatiana looks like in order to be able to transform her in and out of She-Hulk."

Get ready for bedazzling!

In multiple side-by-side comparisons, we can see how many iterations a scene goes through before the final version is reached. Einarsson explains that after scans and photography, the build stage involves “multiple steps of development,” so the character can appear as realistic as possible (despite being pea green and 6’7”). According to Justison, the entire processes took petabytes of data to pull off.

Once the lovely Maslany performed her scene wearing mo-cap gear, a foundational animation was created. "While the animation team is working away, the shaders team is working on refining all of the look of her skin texture, her hair texture, her clothing texture," Justison explains. While this process may be simpler for a standard CG character with one or two outfits, Jennifer Walters touts a whopping 25 outfits in her Hulk form, one of which is a Gala gown with, “over a million sequins that sparkle, [and] catch the light correctly,” according to Einarsson. The sequins “have to be form fitting on her, they have to flow with the dress. I'm just constantly aware when I'm reviewing those shots just what an achievement it was to make that dress."

She-Hulk “follows Walters as she navigates the complicated life of a single, 30-something attorney who also happens to be a […] superpowered hulk.” The series stars a who’s who of MCU regulars, including Mark Ruffalo, Tim Roth as Emil Blonsky/the Abomination, and Benedict Wong as Wong. Other cast members include Ginger Gonzaga, Josh Segarra, Jameela Jamil, Jon Bass, and Renée Elise Goldsberry. Witness the incredible feat of VFX artistry on She-Hulk: Attorney At Law, with Season 1 now streaming in its entirety on Disney+.