Veteran story artist, author and AWN videoblogger, who recently relocated to Atlanta, is now storyboarding on the hit cable series, 'The Walking Dead.' 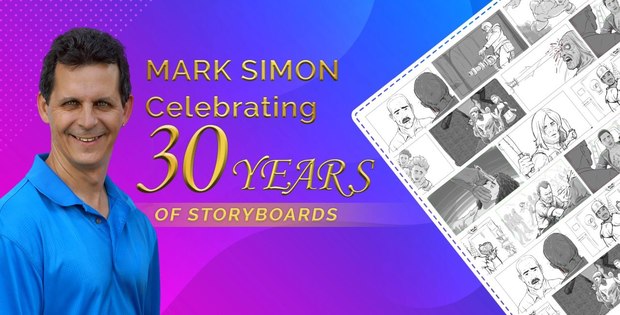 In May of 2018, Mark Simon, president of Storyboards & Animatics, Inc., moved his studio to Atlanta to support the film incentives and productions in the state. In May of 2019, he celebrates 30 years of professional storyboarding for film and TV and now storyboards on the biggest series on cable, and Georgia production, The Walking Dead.

“I have my dream job,” says Simon. “I get to draw every day and tell stories with the best production creatives in the industry. What’s not to love?”

Simon, also the author of the industry bible, “Storyboards: Motion In Art, 3rd Edition,” got his storyboarding start while working at HBO with O.J. Simpson on the hit series 1st and 10.

“I introduced myself to the biggest storyboarding agency in Los Angeles, Storyboards, Inc. One of the agents told me all my samples were wrong. I went back with new samples every week until he booked me on a Honda job. Those samples helped me land a storyboarding gig on 1st & 10, where I was the set designer,” says Simon.

Simon was a production designer when he got the itch to storyboard. “I saw storyboards come across my desk and realized I missed drawing,” he explains.

Simon has storyboarded on everything from feature films to TV series to commercials and video games. He’s worked with everyone from Steven Spielberg to Adam Sandler to Greg Nicotero. He now has nearly 5,000 production credits.

Nicotero is known for producing and directing The Walking Dead. But Simon knows him from a project they worked on together over 25 years ago…The Walking Dead. Funny coincidence, but the projects are very different. The 1995 The Walking Dead was a feature film about the African American experience in Vietnam.

Since moving to Georgia, Simon has shared his experience and knowledge with local talks at DragonCon, ASIFAC, Atlanta Film Festival, Walker Stalker, Microsoft Artist Spotlight, Atlanta ComicCon and is set for the upcoming Senoia Dead Bash among others.

“I love the energy in Atlanta,” he notes. “The people and productions here are amazing. I look forward to many, many productive years here.”

Mark Simon counts more than 30 years of experience working in the entertainment industry as a story artist, producer, and director for live action and animation. He has amassed over 5,000 production credits, and also writes and lectures on industry topics.

He helped develop the Storyboard Pro software and shared in a 2012 Prime Time Engineering Emmy. He was won over 200 international awards for productions he has written and directed.

Mark was inducted into the Digital Animation & Visual Effects School Hall of Fame in 2013. He's been on the board of advisors at a number of universities.

He lectures around the world at major conferences, conventions, and universities, and is a second-degree black belt and two-time national champion in tae kwon do.