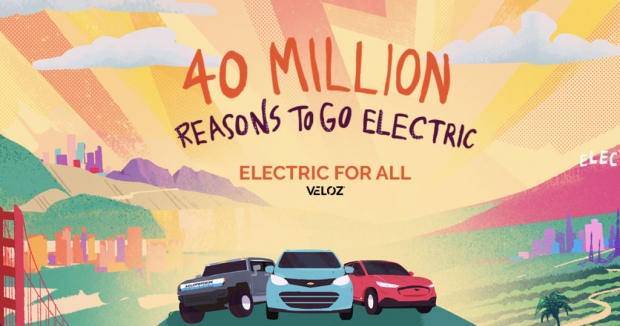 Superheroes abound in 40 million Reasons to Go Electric, the new promotional short from creative agency Superconductor for Veloz, the non-profit behind the annual “Electric for All” culture change campaign. Produced by creative studio Laundry, the spot features avant-garde, bright, and vibrant 2D animation paired with an original Californian take on neo-soul-inspired music sung by the Barbadian-born, Los Angeles-based singer Ayoni.

Previewed at the Clean Energy for America Inaugural Ball and launching January 27, the campaign will be promoted through paid and social media with large-scale reach, and an electric car shopping online portal — ElectricForAll.org — that provides comprehensive consumer resources on electric vehicles. It includes multiple shopping tools that identify car incentives and home charger incentives via the Home Charging Advisor. The initiative launches as the new administration advances its clean energy agenda. The annual campaign from Veloz, a multi-stakeholder, multi-million-dollar nonprofit, is the product of collaboration spotlighting local and global superhero agents of change while celebrating California’s many cultures and underscoring the reasons each and every Californian has to go electric.

"The sooner we transition to an electric transportation system, the less strife there will be in the world,” commented Ruffalo. “This initiative creates an opportunity to empower local heroes everywhere to choose electric transport to a cleaner, more just future.”

“California is a global leader in out-of-the-box thinking, unconventional collaborations and innovative solutions,” explained Veloz public policy board chair Mary Nichols. “Veloz’s campaign is a perfect example: cutting edge content, heroic alliances, and a super-powered approach to make Electric for All a reality. The market is primed, industry is ready, policy is there in California and now with new leadership in Washington, the time is now to inspire and empower everyone to go electric.”

“Veloz is putting the pedal to the metal to speed up the governor’s goal,” added Veloz executive director Josh Boone. “California is at the bleeding edge of culture and our love affair with cars has defined and directed the automobile market for over a century. Our Electric for All campaign mixes magic and method, strategy and secret sauce to push the electric vehicle market past its tipping point.” The 40 Million Reasons to Go Electric campaign is focused on one of the largest barriers to the adoption of electric cars and trucks: outdated myths about cost, choice, and performance.

“Electric cars are already competing with gasoline vehicles in price and they exceed in performance -- but public awareness has not kept pace,” noted Veloz Board Chair Caroline Choi, senior vice president, Edison International and Southern California Edison. “That’s why Veloz has launched ElectricForAll.org, and its annual campaigns to bust the myths, provide comprehensive consumer information and tools, and show how easy, fun, affordable and important it is for all Californians to go electric."

“In a time where there is so much anxiety, so much division, and so much uncertainty in the world, we wanted to do a really positive, inspiring and upbeat campaign that celebrates all of the millions of reasons to drive electric,” remarked Superconductor chief creative officer Chris Adams.

The distinctly Californian animated campaign mixes bright colors, hope, optimism, fun, facts, and original music as it follows these superheroes on a road trip across California.

“The electric car market represents a multi trillion-dollar opportunity for California to create new businesses and jobs, and move our state, nation and world to a cleaner, healthier, more equitable and prosperous future,” commented Boone. “Our campaign aims to tap the superhero in everyone to get to