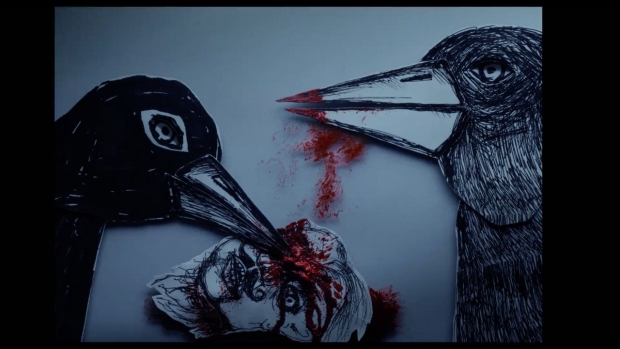 Fifteen years in the making, Kill It and Leave This Town is Polish artist Mariusz Wilczyński’s first feature-length animated film. Winner of the Jury Distinction Award at the Annecy International Film Festival and the Grand Prize for Feature Animation at the Ottawa International Animation Festival, the hand-drawn 2D animated film is a hauntingly surreal meditation on aging, mortality, and loss. The North American premiere begins December 3 at the Anthology Film Archives in a special two-week virtual engagement that will be accompanied by a program of Wilczyński’s earlier short films.

Fleeing from despair after losing those dearest to him, the hero hides in a safe land of memories, where time stands still and all those dear to him are alive. Over the years, a city grows in his imagination. One day, literary heroes and cartoon childhood idols, who in the consciousness of the successive generations are forever young and wearing short pants, come to live there, uninvited. When our hero discovers they have all grown old and that eternal youth does not exist, he decides to return to real life. And the amazing characters living in his imagination lead him back to the real world.

Kill It and Leave This Town voice cast includes Krystyna Janda (Elle, Decalogue, A Short Film About Killing); Andrzej Chyra (United States of Love, In the Name of); Maja Ostaszewska (In the Name of, The Pianist, Schindler's List); Małgorzata Kożuchowska (Hania) as well as director Andrzej Wajda and Anja Rubik. Produced by Agnieszka Scibior and Ewa Puszczyńska (Ida, Cold War).

“Kill It and Leave This Town is not just an intimate story about unfinished conversations with my mum and dad; not just a longing for a friend,” shares Wilczyński. “It is also a portrait of the city I come from, the city I remember. Gray, gloomy, full of chimneys, proletarian and yet beautiful. The city that attracts and repels. The city that I love.”