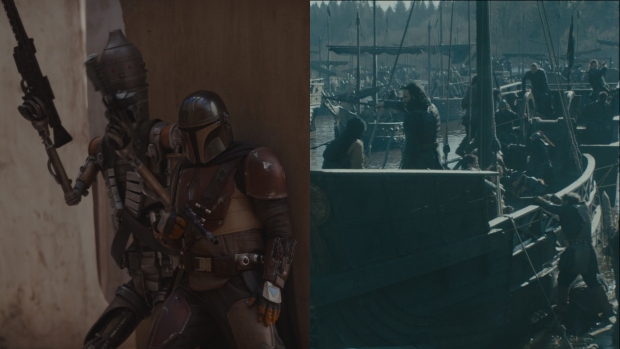 Jon Favreau’s The Mandalorian took home five Emmy’s to lead the winners last night, as the Television Academy presented the third of its five 2020 Creative Arts Emmy Awards ceremonies honoring outstanding artistic and technical achievement in television. The ceremony awarded many talented artists and craftspeople in the categories of Scripted Programming.

History’s The Vikings was the other big VFX award winner, taking the Emmy for Outstanding Special Visual Effects in a Supporting Role.

The 2020 Creative Arts Emmy Awards are being streamed on Emmys.com for four consecutive nights, Monday, Sept. 14, through Thursday, Sept. 17, at 8:00 p.m. EDT/5:00 p.m. PDT with a fifth broadcast ceremony on Saturday, Sept. 19, at 8:00 p.m. EDT/5:00 p.m. PDT on FXX. Winners' names are known only by Ernst & Young LLP until they are revealed to the director of the Emmys ceremony as the show is airing. All five shows are produced by Bob Bain Productions.

Winners announced on Night 3 include:

The Mandalorian “Chapter 2: The Child” – Disney+ OUTSTANDING CINEMATOGRAPHY FOR A LIMITED SERIES OR MOVIE

Watchmen “This Extraordinary Being” - HBO

OUTSTANDING CINEMATOGRAPHY FOR A MULTI-CAMERA SERIES

The Ranch “It Ain't My Fault” - Netflix

The Mandalorian “Chapter 7: The Reckoning” – Disney+

OUTSTANDING PRODUCTION DESIGN FOR A NARRATIVE PROGRAM (HALF-HOUR)
(Area Award: Possibility of one or more than one award.) OUTSTANDING PRODUCTION DESIGN FOR A NARRATIVE CONTEMPORARY PROGRAM (ONE HOUR OR MORE)
(Area Award: Possibility of one or more than one award.)