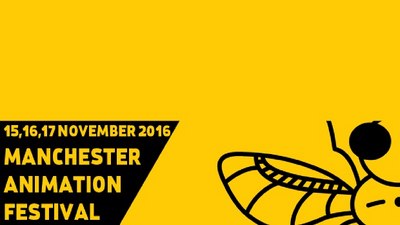 MANCHESTER, UK -- Manchester Animation Festival has announced the dates for the 2016 edition of the festival which will run from November 15 – 17, 2016, once again taking place at HOME in Manchester. The festival has also launched a call for entries to its film competitions which run until July 29, 2016.

The announcement, which took place at HOME, was accompanied by a talk with Ian Mackinnon from Mackinnon and Saunders who talked the crowd through the making of the now emblematic MAF award which the studio designed and fabricated.

The festival awards will return with prizes presented for the best films in the Short Film, Student Film and Commissioned Film categories. The festival has also announced the first set of industry excellence awards highlighting the work of individuals working behind the scenes on commissioned animation productions. The first set of awards will be delivered to artists demonstrating excellence in storyboarding, writing and character animation.

Festival Co-director Steve Henderson remarked, “Film festivals are the perfect platform for highlighting the magnificent work done in all areas of animation, so we thought we would use the platform to highlight individual practitioners within the industry, working hard on television series and commissioned work.”

Manchester Animation Festival launched in 2015 with its first edition attracting over 900 film submissions from 63 countries, with 70 screening at the festival. The festival welcomed over 4,200 visitors with delegates traveling to Manchester from around the world.

The first festival guests have also been announced. Aardman co-founders Peter Lord and David Sproxton start the festival lineup, with the studio celebrating their 40th anniversary this year. The full program of special guests, screenings, workshops, retrospectives, screen talks, master classes will be announced later in the year.

Tickets will go on sale later this year. For further festival details including sponsorship and film submission please visit the festival website.