New Industry Excellence Awards designed by stop-motion puppetry specialists Mackinnon and Saunders will be awarded at the festival running November 15-17. 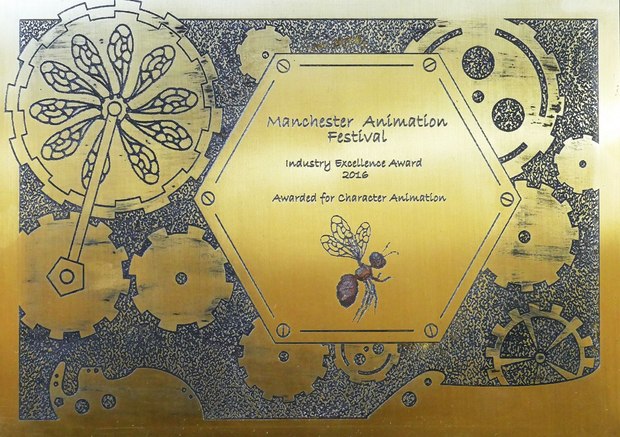 MANCHESTER, U.K. -- Mackinnon and Saunders, the puppet making and animation studio behind Frankenweenie, Corpse Bride and Fantastic Mr. Fox, has revealed their latest creations for the Manchester Animation Festival. This year the festival will present the Industry Excellence Awards with awards specially designed by the studio.

The industrial themed awards have each been etched and then hand finished by the studio in heavy brass plate making each one unique.

The Industry Excellence Awards celebrate contributions to the industry outside auteur and student film making, focusing on industry contributions such as writing for animation, storyboarding and character animation for commissioned films. Nominations for these categories are:

The awards will be complemented by workshops in the categories with Brown Bag staff writers Jim Nolan and Liam Farrell, acclaimed storyboard artist Jez Hall, and Blue Zoo character animator Bader Badruddin -- all uncovering tips and tricks of the trade to delegates attending their workshops. The winners of the awards will be revealed alongside the winners of the short film, short shorts, commissioned film and student film categories at the awards ceremony on Thursday 17th November, hosted by Oscar nominated director Barry Purves.

Taking place at HOME in Manchester, the festival, which the BFI is supporting with National Lottery Funding as part of its audience development activity, will play host to a wide ranging program celebrating animation. Highlights include marking Aardman Animations’ 40th Anniversary with co-founders Peter Lord and David Sproxton who will be picking up the festival’s fellowship award; Blue Zoo Animation Studio will premier their latest VR short Hoo Doo and director Catherine Salkeld will present a masterclass with producer Tom Box and BAFTA nominated director Chris Shepherd will take us on a journey through his career sampling the work that makes him a ground breaking director.

The BFI backed Ethel & Ernest, based on the award-winning book by acclaimed British author and illustrator Raymond Briggs, is a hand drawn animated feature film which is an intimate, engaging and affectionate depiction of the life and times of his parents. Lupus Films director Roger Mainwood, producers Camilla Deakin and Ruth Fielding and Animation Director Peter Dodd join us to discuss in depth the making of the film.

In Your Own Time will look at how these passion projects can become prominent productions with BAFTA Winner Mike Mort presenting an evolution of his character Chuck Steel, from a schoolboy sketchbook to the big screen next year with a special preview of the feature Night of the Trampires. At 25 years old Batty, Berry and Mackinnon’s The Sandman is just as haunting and influential today as it was in 1991, Ian Mackinnon will join the panel for a retrospective discussion of the film alongside Mort and Aardman co-founders Peter Lord and David Sproxton who will present some early Aardman treasures

U.K. animation veteran Chris Shepherd will present a masterclass of his work. From his early films such as The Broken Jaw, to his multi-award winning Dad’s Dead, Who I Am and What I Want and The Ringer, Chris’s films offer a forthright and darkly comedic commentary on today’s society and will be screened at the festival.

In the Frame: Women in Animation will see leading female industry figures debate and discuss the role of women on screen and behind the scenes in what promises to be a lively and thought provoking session that includes screenings and a panel discussion. Folimage will be in attendance to present Phantom Boy whilst Brigitta Ivanyi-Bitter and Professor Paul Wells bring to life the art and craft of Hungarian cold-war painter, experimental filmmaker and writer György Kovásznai. Feature film screenings at the festival include Phantom Boy, The Red Turtle with a special video introduction by director Michael Dudok de Wit, Ethel and Ernest and a 35mm screening of the Ray Harryhausen classic Clash of the Titans which celebrates its 35th anniversary this year. Illuminating documentary Floyd Norman: An Animated Life also screens.

Manchester Animation Festival has also added a special preview of the Claude Barras directed My Life as a Courgette. Due to be released in U.K. cinemas next year, the glorious stop motion about a 9 year old nicknamed Courgette who goes to live in a foster home after a tragic accident won the prestigious Cristal at Annecy in June. Despite a colourfully juvenile aesthetic, My Life as a Courgette is a mature story that deals with the complicated issues of growing up in a sensitive, thought-provoking and humorous way. The film will screen on Tuesday 15 November.

Also added to the line-up is Philip Hunt, creative director of Studio AKA. Hunt directed the BAFTA winning Lost and Found, based on the book by Oliver Jeffers. Lost and Found will screen at the festival as part of a retrospective screening of the studio’s finest work which includes Marc Craste’s BAFTA winning Jojo and the Stars and Varmints and Grant Orchard’s Academy Award nominated A Morning Stroll.

The Ray and Diana Harryhausen Foundation will also be setting aside time to “Meet the Creatures” in a session where collections manager Connor Heaney and trustee John Walsh will bring the puppets of Medusa and Calibos from Clash of the Titans to the festival, giving delegates the chance to get up close and personal with the puppets and pose questions to the experts.