3D animated comedy about a frog with an identity crisis wins award for Best Family Film at its world premiere at the Niagara Integrated Film Festival 2014. 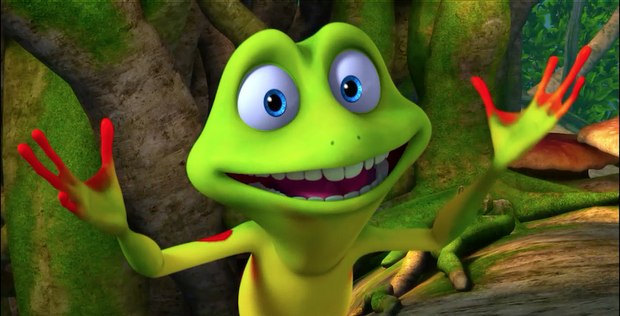 Malaysia -- Ribbit, a 3D animation comedy/adventure story about a frog with an identity crisis won the Best Family Film Award at its world premiere at the Niagara Integrated Film Festival (NIFF) 2014 in Canada on Saturday, June 21 2014. Directed and written by Chuck Powers, Ribbit features well known voice talents such as Sean Astin (Lord of the Rings), Tim Curry (The Hunt for Red October), Russell  Peters  (comedienne extraordinaire)  and  Cherami Leigh (Fast Food Nation), and was recorded in Los Angeles, California. The development and post-production works was entirely completed in Cyberjaya, Malaysia, while the animation production took place in Cyberjaya, Malaysia and Mumbai, India. The bulk of the rendering work was done in Hong Kong, China, making Ribbit a truly global project, which is fitting for a story set against the backdrop of the Amazon rainforest.

The film will be released in a number of major territories including the United States, the United Kingdom, Germany, Australia, Japan, China, South Korea, South America and the Middle East, commencing Q4 2014. Malaysia will release the original English version and an adaptation on September 4, 2014. Ribbit’s adaptation into Bahasa Malaysia was directed by a well known local film director, Mamat Khalid, and features the voices of renowned Malaysian artists Johan RajaLawak, Elfira Loy, Awie, Datuk Aznil Hj Nawawi and Izzue Islam.

The key driver, strategist and believer of this project, Norman A. Halim, the Executive Producer, who is also the Executive President and Group CEO of the KRU Group of Companies states, “We are honored and excited that we have garnered such a recognition in our first foray into the animation arena. We have been in the entertainment business since 1992, however we realize that the best way for us to go global is via animated feature films and television shows. We have gathered the best talents in the region for Ribbit.”

Ribbit tells the tale of a frog named Ribbit with an identity crisis. Unlike other frogs, Ribbit hates hopping and has a strong aversion to water. Feeling a misfit, he is full of questions about his life...and so together with his best friend, a flying squirrel, he embarks on a soul-­searching journey in search of the truth and his rightful place in this world. Confusion reigns when Ribbit is accidentally hypnotised by a conman or rather, a “conbat,” making Ribbit believe that he is a human  prince trapped in a frog’s body. With the mission to kiss a human princess, Ribbit will soon discover that being a frog is not bad after all…and the love of his life has always been right before his very eyes. Catch the film on the big screen on September 4, 2014… and it will also be available in 3D stereoscopic format.