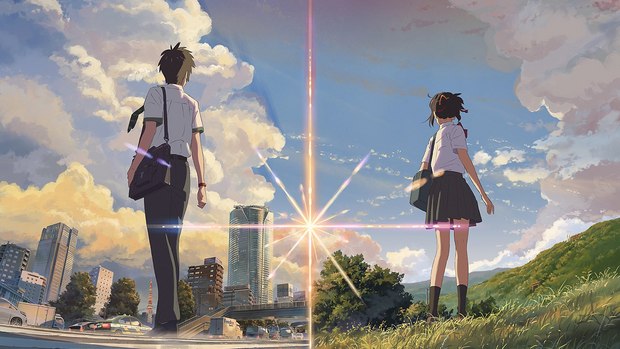 FLOWER MOUND, TX -- Funimation Films will open Makoto Shinkai’s animated blockbuster and global pop culture hit Your Name in North American theaters on April 7, 2017. The film will be released in both English-language Dub as well as the original Japanese-language with English subtitles.

Written and directed by Makoto Shinkai (5 Centimeters Per Second, The Garden of Words), Your Name has already received critical acclaim and commercial success overseas, dominating the burgeoning Asian box office to quickly become the fourth highest-grossing film of all time released in Japan -- behind only Spirited Away, Titanic and Frozen. Your Name has also since become the second highest-grossing Japanese animated film released in Japan, surpassing legendary works from Hayao Miyazaki including Princess Mononoke, Howl’s Moving Castle and Ponyo.

“It’s truly a joy to be part of a film like Your Name that has surprised everyone’s expectations and quickly captivated the hearts and attention of audiences and films critics alike,” said Gen Fukunaga, founder and CEO of Funimation Entertainment. “I have always believed that a touching and beautifully told story can mesmerize mainstream audiences regardless of a film’s genre. Your Name is the perfect example of this and will be one that journalists will point to for years to come.”

Your Name was selected by the Los Angeles Film Critics Association as Best Animated Feature of 2016 and is on the official consideration list for a nomination in the Best Animated Feature category at the 89th Annual Academy Awards. The Academy of Motion Picture Arts and Sciences will announce final nominations for the 89th Annual Academy Awards on January 24, 2017.

“We’re thrilled to be bringing Your Name to theaters across North America and Canada this spring,” said Mike Duboise, COO of Funimation Entertainment. “Based on audience reaction around the world and a week’s worth of sold out screenings during the film’s Oscar qualifying run last December, we expect Your Name to be a hit with North American theatergoers this April.”

The film’s soundtrack and original score was produced and composed by award-winning Japanese rock band RADWIMPS. Lead singer of RADWIMPS, Yojiro Noda, spent part of his childhood in the United States and is thrilled to provide the English version of all the chart-topping songs in the North American English dub version of the film, including Dream Lantern and Zenzenzense.

“Melody and lyrics must be something inseparable for RADWIMPS. For all that, I cannot respect and thank them enough for making these wonderful English versions to entertain international audience,” said Makoto Shinkai, writer and director of Your Name “In Your Name, songs, lines and the story are in complete harmony. Lyrics represent characters’ cry of the heart. I hope these alternative versions will lead the audience to a better understanding of the world of Your Name.”