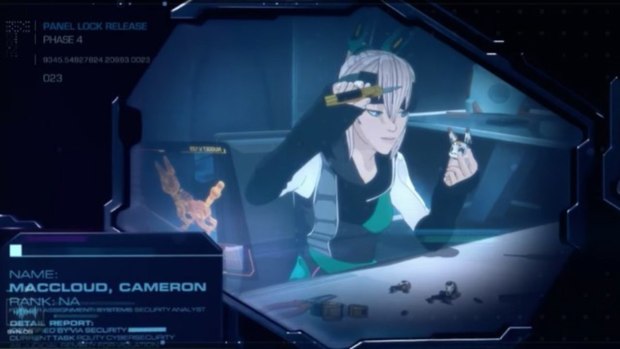 Williams will voice “Cammie MacCloud,” a mischievous Scottish hacker with boundless energy, and the youngest recruit to the gen:LOCK program. In the teaser, the voice of David Tennant’s “Doc” discusses the backgrounds of two more gen:LOCK candidates: Williams’ “Cammie” and Koichi Yamadera’s tank driver, “Kazu Iida.”

In gen:LOCK, Earth’s last free society is on the losing side of a global war, and recruits a diverse team of young pilots to control the next generation of giant, weaponized robot bodies known as mecha. These daring recruits will find, however, that their newfound abilities come at no small cost.

gen:LOCK’s voice cast is led by Michael B. Jordan (Black Panther, Creed) who voices the main character, Julian Chase, and also includes Dakota Fanning (The Alienist, Twilight Saga) voicing expert mech pilot and Chase’s love interest, Miranda Worth, Kōichi Yamadera (Cowboy Bebop, Ghost in the Shell) voicing Kazu Iida, one of the new recruits transferring from Japan’s military forces, to fight alongside Chase in the gen:LOCK program, and Tennant voicing Dr. Rufus Weller aka Doc, a lead scientist with the Experimental Science Unit (ESU) and the inventor of the gen:LOCK technology.

gen:LOCK is the second anime-style series and third 3D animated series from Rooster Teeth Animation. RWBY, entering its sixth season this fall, is a global anime phenomenon conceived by the late Monty Oum. Red vs. Blue is Rooster Teeth’s first 3D animated series that began as a machinima production before incorporating custom animation, and is the longest running web series of all time. Outlier Productions, Jordan’s production company, is co-producing gen:LOCK along with Rooster Teeth.

"Working with Maisie is as fun as it gets,” said Haddock. “Her energy and the sense of humor she brings to Cammie is an absolute delight. I’m running out of superlatives to describe how perfect this cast works for the characters, but Maisie truly sounds exactly like how Cammie does in my head -- she’s brilliant."