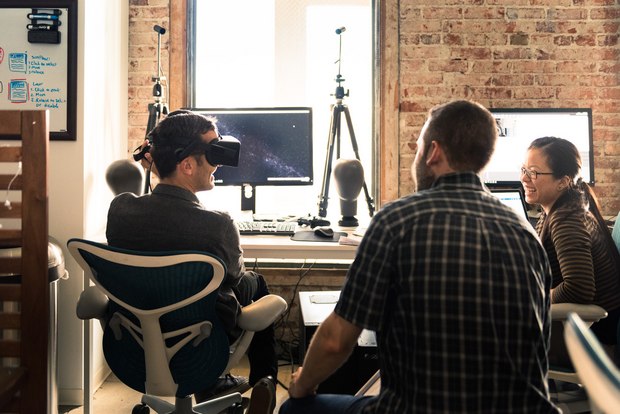 Established in August 2013, Magnopus fuses artistry with next-gen technology to push the boundaries of immersive content creation. While co-founders Rodrigo Teixeira, Alex Henning and Ben Grossmann are recognized for their talents in the visual effects world, including picking up Best VFX Oscar hardware for Martin Scorsese’s Hugo, Magnopus follows a different charter. Magnopus develops immersive content for VR and AR experiences, drawing on talent from the VFX and gaming industries. Its innovative approach to problem solving has spawned several standout AR and VR projects, including the 2016 Proto Award Best Live Action Experience winner The Argos File and 2017 Emmy Award-nominated Oculus Rift experience Mission: ISS, which simulates life on board the International Space Station. Most Magnopus projects are interactive VR or AR and therefore rendered in real-time game engines, so the studio’s local render farm is a fairly modest 50 nodes; however, when a client approached them to create a 360-video requiring 5K stereo renders, Magnopus began looking for a way to scale its farm, ultimately opting to add Conductor cloud platform to its pipeline.

“The prospect of cloud rendering has always been attractive because it enables people to scale rapidly, and while it’s become much cheaper, it wasn’t a financially viable solution for us until Conductor came along. Our studio has great connectivity and a 10-gig link, but we’re located in a high rise in downtown Los Angeles; even if we purchased more machines, real estate is expensive and so is the energy required to power and cool them. Conductor’s special formula for spinning up machines and managing costs made it affordable and an ideal option to scale our rendering capabilities,” said Magnopus CTO Lap van Luu.

Conductor was fully integrated within Magnopus’s pipeline in less than two weeks. Assets are created and renders are submitted in Autodesk 3ds Max, converted to Chaos Group V-Ray scenes, then out through Conductor for processing of renders in V-Ray Standalone. Though a Windows-based studio, Magnopus doesn’t need to purchase duplicate licenses for cloud rendering because its Conductor pipeline is designed to render on an alternate, virtual operating system, which removes any unnecessary costs.

“We’ve only been using Conductor a few months and it’s been amazing. We were able to render 1,500 frames of 5K stereo footage in a single day, which would have taken twenty times as long if run on our internal farm. So far, our peak has been over 13,000 simultaneous cores. When time is of the essence, you can’t just call up the electric company and ask for an extra 200 amps of power, so it’s great to have access to burst render capability for quick turnaround,” Luu explained.

In addition to speed and costs savings over local infrastructure, Luu appreciates how Conductor manages software licensing and compute costs, and factors that into one price for users. He said, “The Conductor breakdown is smart. It only uses what is needed. When we first tested Conductor, it helped us deliver a project that would have cost twice as much using any other service.”

Conductor’s analytics capabilities have also proven useful, allowing producers to log in and see average frame render times and costs, and set thresholds. When those thresholds are close to being met, Conductor sends out a notification and won’t render beyond preset limits.

“I love that we get an alert every time we hit our threshold, and the granularity of the analytics is perfect. The metrics are straightforward and very insightful. In general, Conductor is awesome to work with. Customer service has also been so proactive; it’s like we’re working with a good friend,” concluded Luu.