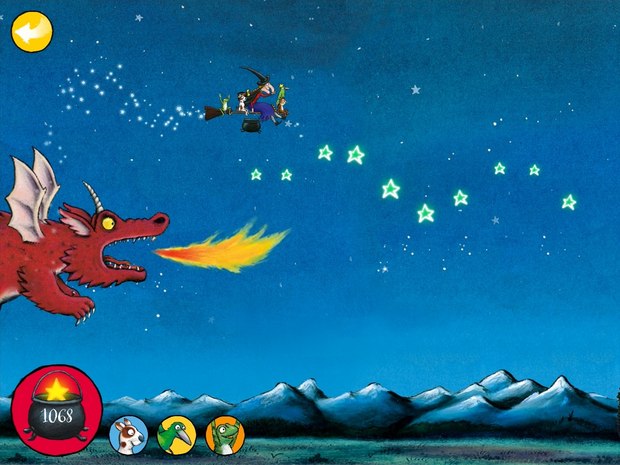 Magic Light Pictures, the BAFTA award winning, brand building and production company, announces the launch of Room on the Broom: Flying, the second interactive games app based on the much-loved classic picture book Room on the Broom, written by Julia Donaldson and illustrated by Axel Scheffler.

Specifically designed for 3 – 7 year olds, the new Room on the Broom: Flying app is priced at 79p and is available to download exclusively via the App Store here for iPad, iPad Mini, iPhone and iPod Touch.

The game lets children take control of Witch’s magical broomstick and zoom through the sky, collecting as many stars as possible. With room on the broom for everyone, they can also pick up all of the friends along the way - Dog, Bird and Frog. However, players will have to beware the Dragon, who’s looking for Witch and chips and breathing fire behind them. Using simple and intuitive mechanics, the user is able to soar over the moors and mountains from the beautiful picture book.  As well as catching stars, children can pick up letters and to spell phonic friendly words.

The app will be available to buy alongside the BAFTA nominated Room on the Broom: Games, Gruffalo: Games and Gruffalo: Photo apps, all published by Magic Light Pictures.

Martin Pope, co-founder, Magic Light Pictures said, “Magic Light Pictures is dedicated to creating imaginative and high quality products which engage children and families.  We’re delighted to be creating a second Room on the Broom app with this Flying game, building on what we learned with our first, BAFTA nominated app. This game gives fans of the story an opportunity to immerse themselves even further in the wonderful world which Julia and Axel created. Room on the Broom: Flying is a fun and educational game which we’re looking forward to children enjoying.”

The Room on the Broom animated film premiered on BBC One on Christmas Day 2012 in the UK garnering 7.6m viewers. This success has been replicated internationally. To date Magic Light’s distribution arm has sold the BAFTA  winning film to over 30 broadcasters and it has aired in over 167 countries worldwide. Territories include:  Australia, Belgium, Canada, Croatia, Czech Rep, Denmark, Finland, France, Germany, Iceland, Ireland, Israel, Latin America, Middle East and Africa, Netherlands, Norway, Slovenia, South Korea, Spain, Sweden, Switzerland and Turkey – with many countries translating the film into their native language  – to date it is available in 16 languages.

Magic Light Pictures has rolled out the first phase of its merchandising programme with plush and puzzles. The DVD successfully launched in the UK in March 2013 with over 100,000 units sold to date, and over 110,000 units shipped in the USA since release in August. Internationally, the Room on the Broom DVD is also being distributed in Australia, New Zealand, Canada, Germany, Israel, Netherlands, Singapore, Hong Kong and Scandinavia.

The Room on the Broom book, which was first published in 2001 by Macmillan, continues to be a huge success with over two million copies sold worldwide. In the USA, the book has just claimed the #1 spot in the Children’s Picture Book Category for the week ending September 15, according to Publisher’s Weekly.

In addition to winning a BAFTA, the Room on the Broom film has also won an international Emmy Kids Award, the RTS Award for Best Children’s Programme and received an OSCAR nomination.