Check out the trailer for the delightful new animated family special about a long, strong worm with amazing skills and a big heart; featuring the voices of Oscar winner Olivia Colman and Emmy nominee Matt Smith, and based on the popular picture book of the same name, the show airs on BBC One December 25. 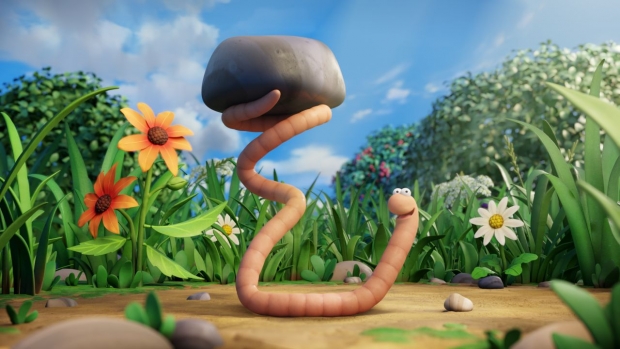 The BBC has released a “first look” official trailer for Magic Light Pictures’ 3D animated family comedy Superworm. Based on the popular picture book written by Julia Donaldson and illustrated by Axel Scheffler. The 30-minute film will air on BBC One Christmas Day and drop on the BBC iPlayer streaming platform also on December 25.

The project, announced this past February, comes on the heels of the company’s successful production of the animated special, Zog and the Flying Doctors, produced last year for BBC, also based on a book by the same award-winning writers. Magic Light Pictures has been providing family programming to BBC One for over a decade, and their films, based on books by the award-winning duo, are among the most popular family titles on BBC iPlayer.

The studio’s latest holiday special is about Superworm. He’s a long, strong worm with amazing skills and a big heart who keeps on saving the day. Along with best friend Butterfly, he sets out to help other garden animals. The duo saves the baby toad from a major road, they entertain bored bees, and rescue a beetle.

It seems there’s no end to Superworm’s skills, until he begins to get a bit too full of himself and he starts to ignore his friend. But, when the evil Wizard Lizard sends his servant, Crow, to kidnap him, Butterfly hatches a plan with the other garden creatures to save Superworm, trapping Wizard Lizard and dumping him on the rubbish heap!

All the animals celebrate Superworm’s return, and Butterfly forgives Superworm for his big headedness. The pair are reunited as friends.

The voice cast is headlined by Oscar winner Olivia Colman as narrator, and Emmy nominee Matt Smith playing the hero, Superworm. They are joined by Patricia Allison (Sex Education) as Butterfly, Rob Brydon (Gavin & Stacey) as the Crow, and Kobna Holdbrook Smith as Wizard Lizard.