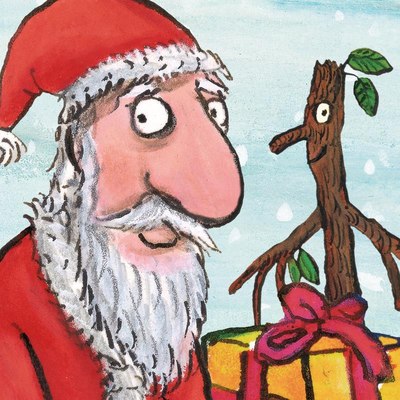 Using beautiful artwork from the much-loved picture book, published by Scholastic, the app lets children take flight with Stick Man and Santa on a wonderful adventure that sees them help deliver the magic of Christmas.

The app features three challenging levels where players fly in Santa’s sleigh over the rooftops and have to drop presents down the right chimneys. As they progress, decorations are unlocked for personalising their very own Christmas tree in a separate snow-filled festive feature within the app.

Not only must players make sure their deliveries are on target, but they should also keep their eyes peeling for shooting stars in night sky, which can be grabbed for bonus points.

Developed by Magic Light Pictures with Scary Beasties, Stick Man: Helping Santa is specially designed for 3-7 year olds with an intuitive design and in-app purchases. It is available to download via the App Store for iPhone, iPod Touch, iPad and iPad Mini.

Barney Goodland, Digital Manager, Magic Light Pictures, commented, “We’re delighted to be releasing Stick Man: Helping Santa to coincide with the BBC’s Christmas premiere of the animated film. It’s been a real pleasure working with Julia’s text and Axel’s illustrations to bring them to life for the app. The game is fun, challenging and unmistakably festive! We hope children enjoy being a part of Stick Man’s world this Christmas and have their own adventures with Santa.”