Oscar-nominated entertainment company announces the launch of ‘Gruffalo: Games,’ the first ever interactive games app based on the much-loved classic picture book ‘The Gruffalo,’ written by Julia Donaldson and illustrated by Axel Scheffler. 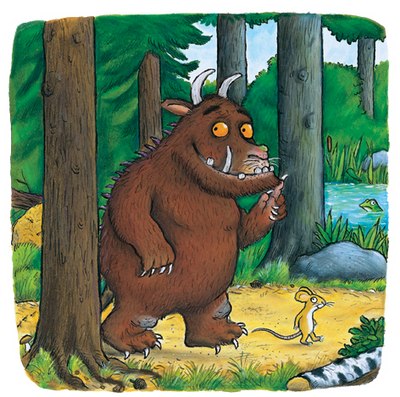 Oscar-nominated entertainment company Magic Light Pictures has announced the launch of Gruffalo: Games, the first ever interactive games app based on the much-loved classic picture book The Gruffalo, written by Julia Donaldson and illustrated by Axel Scheffler.

Developed by Magic Light Pictures with Stormcloud Games, Gruffalo: Games marks The Gruffalo’s 15th anniversary and is available to download via the AppStore for iPhone, iPod Touch, iPad and iPad Mini, priced at £2.99.

The app features six challenging and exciting puzzle games designed for 3-7 year olds to help develop their reactions, logic and problem solving skills. Children can play Snap and 3 in a Row against the Gruffalo, help Mouse catch nuts, complete jigsaws of the famous characters, have fun with the forest bugs and match as fast as they can.

Based on Scheffler’s original illustrations and with charming music composed by René Aubry, the app enables players to explore the wonderful world of The Gruffalo and complements the experience of reading the book or watching the animated film. It is also designed to ensure both players and parents feel comfortable and safe in the digital space with no in-app purchases or third-party ads.

“We're very excited to be releasing Gruffalo: Games as we want the many fans of the book to enjoy the fun challenging games as much as we do,” says Martin Pope, co-founder, Magic Light Pictures. “We want players to get involved in the world of The Gruffalo, helping Mouse to catch nuts or playing games against the Gruffalo himself. It's such a pleasure and honour to be working with Julia's wonderful rhymes and Axel's amazing illustrations. We hope the puzzle games will be entertaining and rewarding for children and families everywhere.” "Once again we have loved working with Magic Light Pictures to produce this app,” says Frank Arnot, Director, Stormcloud Games Ltd. “As parents, and readers of bed-time stories, it’s been a delight to help make a series of fun and challenging mini-games based on The Gruffalo. It's important for us as game developers that Gruffalo: Games is a positive, engaging digital product for children to enjoy. We developed our own puzzle games, as well as using traditional game formats such as Snap! and Three in the Row to give players the chance to play against and outwit the Gruffalo!"

Gruffalo: Games is the second app produced by Magic Light Pictures, following the launch of the magical Room on the Broom: Games app late last year, which features a collection of fun filled games based on the best-selling book Room on the Broom, also by Julia Donaldson and Axel Scheffler.

To further celebrate The Gruffalo’s 15th anniversary this year, Magic Light has worked in partnership with Forestry Commission England to launch 28 activity trails at sites across the country, and 15 of the trails have 7ft wooden, hand carved sculptures of the Gruffalo. In addition, The Eden Project in Cornwall hosted a month of Gruffalo activity in May, new product lines including a range of Gruffalo reading frames at Specsavers and luxury wooden toys from Bajo have been launched, while Macmillan Children’s Books released their wonderful foiled anniversary editions. Magic Light Pictures’ multi-award-winning film The Gruffalo was first broadcast in the UK on BBC One, Christmas Day 2009.The film was seen by over 10m viewers, and then nominated for both an Oscar and BAFTA Film Award. The companion film The Gruffalo's Child premiered on BBC One, Christmas Day 2011 to 10m viewers.  Together they have sold over 700,000 DVDs in the UK, and Magic Light’s distribution arm has sold the films to over 80 broadcasters and 180 countries worldwide including USA, Germany, France, Scandinavia and Australasia. The Gruffalo was also recently awarded a special Prix Jeunesse 50th anniversary award for The Best Fiction Programme of the Last 50 Years, cementing its status as a true children’s classic.