Emmy award-winning CGI and digital solutions company Mackevision creates some of the most iconic scenes in the smash-hit HBO series, including the city of Braavos and King’s Landing. 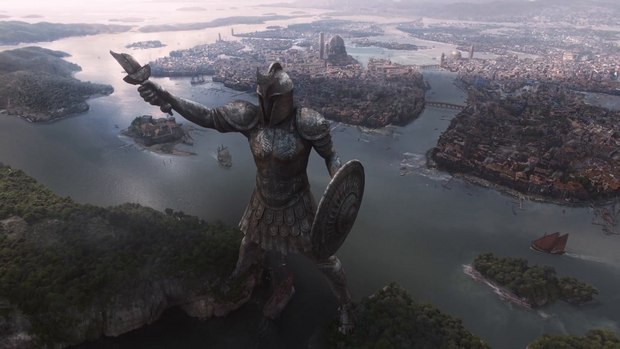 The reel shows how Mackevision, which won an Emmy Award for its work on Game of Thrones Season 4, created some of the most iconic scenes in the smash-hit HBO series, including the city of Braavos and King’s Landing.

The fifth Season of Game of Thrones revisits some locations known from previous seasons along with some new ones. Mackevision was tasked to work on 66 VFX shots, with a total length of over six minutes and 34 artists involved. Under the guidance of VFX Supervisor Joern Grosshans, several big buildings and 3D environments were realized, as well as matte paintings and CG ships including corresponding water simulations.

A special focus lay on the City of Braavos, which the audience got the first glimpse of in a gigantic establishing shot in Season 4. In addition to the Titan, in season 5 viewers also visit the House of Black and White and the Iron Bank. Both of them were realized by Mackevision as 3D environments and set extensions. Also done as a big 3D environment was the already well-known fortress Red Keep in King’s Landing, which got a facelift for two close-up shots. Several panoramas of King’s Landing as a city vista were done as 2.5D matte paintings which were projected onto simple 3D geometry.

Mackevision’s pipeline employs Autodesk 3Ds Max and Chaos Group’s V-Ray, along with +Phoenix for water simulations, Pixologic ZBrush, The Foundry’s Nuke and Adobe Photoshop. Another of Mackevision’s specialties are ships, both anchored and sailing, with all the necessary water and oceans simulations, which were used in over 15 of the shots this season.